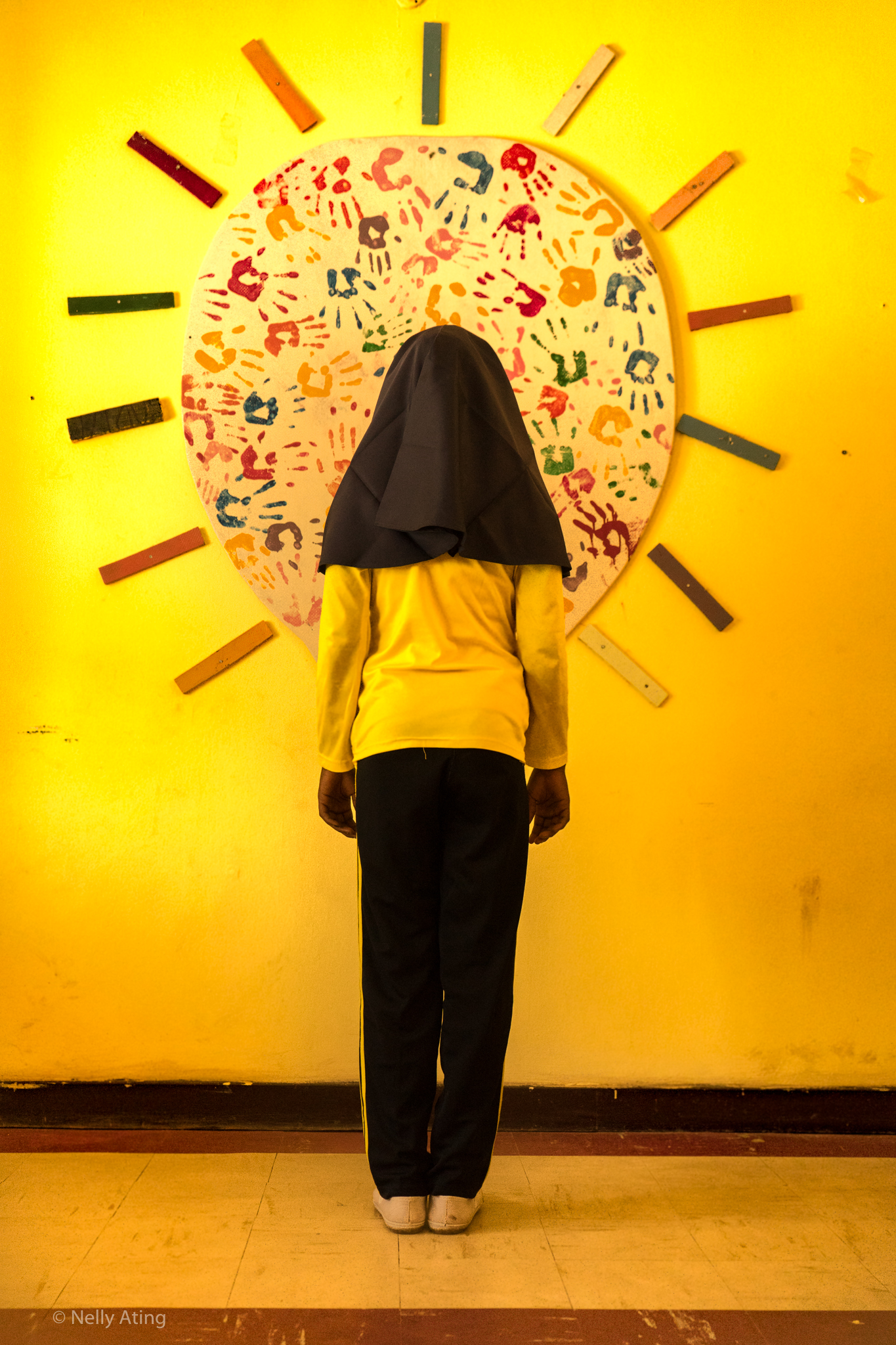 Hafsat Hussein (not real name), 13, sits with her peers in the class cheery and reciting nursery rhymes. Hafsat was one of those girls rescued by the Nigerian army in 2016. She was an underage armorer for Boko Haram.

At age 10, she was abducted leaving behind her twin. Hafsat spent 3 years in captivity, witnessing mass slaughter and cleaning the bloodstains from weapons.

Away from the stolen years of education, traumas, psychological anxiety, are 100 young girls like Hafsat who are defying their experiences to reclaim their self-esteem and dignity through creative education.

The literacy center sits in the epicenter of insurgence – Maiduguri, a town known to be resilient despite series of scalding attacks threatening its peace.

The schoolgirls were identified by the community leaders are enrolled in a small class size of 16-17 in each class. The six classes are colorfully decorated.

In one of the classes, a girl is backing her peers solving a quantitative reasoning equations on the board, another class has a teacher hugging a student for finding a missing word in a sentence while her mates cheered on.  Classrooms are decorated with springs of positive words and mathematics/English/Hygiene murals.

Like Hafsat, many of the girls who were abducted suffered PTSD, trauma, stress, and anxiety. But through the core values such as unity, forgiveness, justice, embedded in their education the girls are slowly gaining their confidence, foster logical reasoning and empowered of which is the secular education the militants believe corrupts their Islamic values.

Ben Tivkaa, Clinical Psychologist Neem Foundation says the girls’ recovery in the program is very impressive. “When Hafsat first joined the program, she was aggressive, suffered flashbacks. The mere sight of a slaughtered chicken triggers flashbacks.”

Their psychological assessment is confidential, some had moderate PTSD symptom, after post assessment, we check their level has psychosomatic complex.

For the past 8 months, Neem Foundation has been working with these girls also providing psychosocial support with the help of an in-house counselor in the school. They are also offered one-meal per day and work closely with their parents and guardian.

“We try to replicate the formal education system complementing by providing an approach which involves psychological assessment and vulnerability checks. Getting them to understand more conventional science of education. Giving them a different narrative from what they’re exposed to,”Ahmed Jumare, Senior Program Officer.

Within 2009-2014, Boko Haram has launched a series of attack on schools in Yobe, Borno, and Adamawa State. In northeast Nigeria, education has seen a major hit as the group whose name signals “western education is forbidden” has constantly attacked schools. Human right watch records that between 2009 and 2015 than 910 schools have been attacked and forced at least 1,500 to close. By early 2016, an estimated 952, 029 school-age children had fled the violence.”

Mostly the group keeps launching subtle yet pervasive attacks on the girl-child education.

Early this year, February 19, about a hundred school girls age 11-19 were kidnapped from a government secondary school in Dapchi, while in 2014, 276 schoolgirls were kidnapped from Chibok. Both towns approximately a few kilometers from each other in Yobe State

104 of the 110 Dapchi girls and 154 of 276 Chibok girls few were released. Some are still in captivity. The Buhari led administration promised to foresee the freedom of the remaining girls in captive.

For initiative like the Lafiya Safari, it is a little water in the ocean to offset lost years of their education. They worry about lack of funding to transfer the schoolgirls to a private formal education.

“We teach the girls: respect, dignity, peace, unity forgiveness, tolerance, and justice as well as critical thinking and problem-solving skills,” says Aisha Bukar, assistant education center manager, “we are hoping the program run for a year or two with generous support from our donor, but it is still not enough.”

The Nigerian Legal System Fails Women, But If You Have Been Stopped From Doing Any of These Three Things, The Law Is On Your Side.