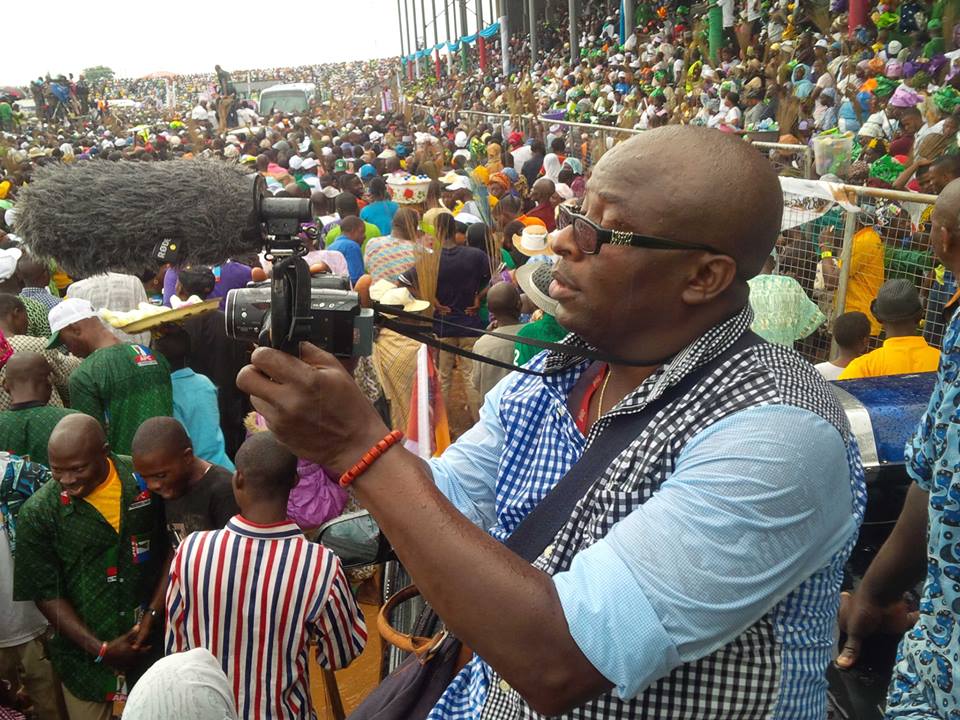 Over the years, he has worked with Associated Press and Reuters. Niyi was nicknamed “Miracle man of Reuters” and “King of Nigeria” at Reuters and Associated Press respectively for his fearless ability to cover extremely dangerous stories.

In 2011, his documentary on MKO Abiola titled ‘Journey to Martyrdom’ got nominated for an award in the film festival at Qatar. He lives in the UK with his three children.

Our guest is Niyi Babade, 50, a nationally known journalist with Cable News Network (CNN), NewsWireNGR’s Ohakpougwu Chinwendu sat with the veteran Journalist and he tells us about his ties with the Nigerian Military and the war on dreaded terrorists sect, Boko Haram in Northeast Nigeria.

Read Excerpts of the interview..

Q: How correct is it that you train the Nigerian military?

A: Yes, I train them in some areas. We call it Hostile Environment or Situation-In-Combat Environment courses. This refers to the Dos and Don’ts when you find yourself in a combat environment.

Q: You are neither a veteran nor a reservist. In what capacity do you train the Nigerian military?

A: No I am just a bloody civilian. (Laughs). I have gone through some military tutelage in Australia, in England on Hostile Environment. That is where I garnered the experience I use in training the Nigerian military.

Q: How would you describe your experience working as an instructor to the Nigerian military?

A: It’s a beautiful experience. I get to exhibit my talent in a different clime apart from the usual journalism that I practice.

Q: What members of the military do you train?

A: The information and public relations arms of the military. Q: How could you tell that they would pass down to other soldiers what they had learned from you?

A: the soldiers themselves organize well periodical training where some of the things I thought are passed to those who couldn’t attend.

Q: How efficient are the training you deliver to the military in the fight against Boko Haram?

A: Yes. The courses are tailored to help them generally in combat situations. With the issue of Boko Haram, this is supposed to be a plus in the fight against Boko Haram.

Q:  We find that with all the training and resources are given the military; they are not capable of defeating Boko Haram. Why is this?

So far, they have been able to subdue Boko Haram. What we have in the case of Boko Haram is a situation where the Nigerian army suppresses and overruns the terrorist group and then from nowhere we find that they (Boko Haram) have been resurrected. This doesn’t translate to failure on the part of the armed forces. It just means that there’s politics perpetuated over the issue of terrorism in Nigeria. The Nigerian military cannot be blamed for the attack on Dapchi because the military was not there when it happened. This is not a case of military’s failure during a confrontation with the militia Boko Haram. Most of the blame should go to school workers and the efficacy of the Safe Schools Initiative.

Q: Are you aware of Amnesty Nigeria’s claims that the Nigerian Military had ignored advanced warnings of the Boko Haram attack in Dapchi of Yobe state?

A: Yes I have read those reports. Like I mentioned before Boko Haram is being politicized. The Nigerian Military does not act without orders. That’s all I can say on that matter. Right now, the military only needs to intensify efforts to secure the release of the girls.

Q: Speaking of the release of girls, we know that not all of the kidnapped Chibok girls have returned home. How confident are you that the Nigerian military can defeat Boko Haram and return both the Chibok and Dapchi girls?

A: I am emphasising this again: the Nigerian army is capable of defeating forces stronger than Boko Haram if given a level playing field. I mean a situation where the leaders or perpetrators of this acts are found and their locations are known. Then we will see that this issue will be a thing of the past.