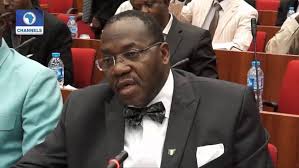 At the marquee (event centre) of the Obasanjo Presidential Library, Abeokuta,  the high and low of society from the four corners of the world gathered on Monday, 5th March, 2018. Why? To  honour, one whom even the aged and most venerated of men prefer to ascribe the revered appellation – Baba – normally reserved for few in most traditional cultures. As they so gathered, the husky but defiant voice of a town crier, with peculiar Owu ‘tribal’ facial marks, spared no breath throughout the occasion to remind his audience of the orike (ancient Yoruba folkloric praise singing genre of the  pedigree) of the celebrant. Who he asked rhetorically? As if talking to a gathering of stranger, he answered: about one, named  Olusegun Aremu Okikiola born to the Obasanjo family of Owu sub-group of Abeokuta town, eighty-one (81) years ago.

The town crier reminded intermittently,  that gathered were Royalties,  Nobles and political helmsman. Along with  Diplomatic coterie and religious prelates. They were  joined by  other notable persons many of  whom had becomed bald and greyed from much learning and scholarship. Not less gathered  were countless men and women, of little airs but in their own rights of distinction, goodwill and good conscience. All to celebrate a most outstanding statesman. So all listened with rapt attention as speakers, one after the other recounted the worth of the person whom Chairman of the Occasion, Dr Christopher Kolade and one time Nigerian Chief Diplomat to the Court of St James in London and by dint of being older simply called ‘birthday boy’.

Yet to none other, in life or death do such galaxy of humankind gather, so often and on that day to appreciate God’s gift of life and benevolence. But some are wont to query, why the exceptional re-indulgences of this son of a mere cocoa farmer at 81 years of age ? Well,  numerical reasoning as a field preoccupies itself with the process of understanding the deeper meaning of numbers.  While this derives its foundation from the panoply between such disciplines as mathematics, astronomy and philosophy, it nonetheless has more profound relevance to the esoterics and metaphysics.

Being no numerologist or clairvoyant, it is needless to hazard any detailed discussion on the valorative significance of 81. It will suffice, to mention the common thought, that the number 81 is a definitive crossing line into the sagely realm – old man/woman. Indeed, after attainment of the ripe age of four-score (80 years); as was adumbrated by Amb. Kolade, 81years is also a time for deep reflection, introspection about the journey of life.  It is a time to take stock, painstakingly and meticulously of the major milestones. It is also a time to rejig, re-energise and re-strategize for the last lap of the journey of mortal earth.

When he turned 80, I chronicled Obasanjo as an ‘Enigma’. But more than that is the fact that his phenomenal life was full of many coincidences, clearly plotted by the finger of the Creator Himself. So Baba Obasanjo, also commonly known as OBJ was a pioneer of many sorts.

Without going too deep into the  incipient days, it remains as an open testimonial that by dint of academic brilliance, he was able to cut out a niche for himself and catapult to higher education.

Soon after, he found himself as a pioneer engineer in the Nigerian Army.

His role in the Congo, as one of the first set of United Nations Peace keepers is a timeless reminder of the worth of this yielded life.

WAR HEROISM AND ARMISTICE But our own country, Nigeria found itself engulfed in  patricidal and sacrilegious  bloodletting in two military coups in 1966 and a civil war, 1967 to 1970.  At the height of the war, Obasanjo found himself deeply involved in the trenches. Ultimately, he was commandeered to take charge of the most critical frontier – The Third Marine Commando. From hindsight, Benin had fallen under then Lt. Col Theophilus Danjuma. The story is told that haven taken over from then Col Murtala Muhammed, the Jukun-born Danjuma went through Idah in present Benue State to Agenebode in Edo State to access Iboland and took over Onitsha. But the most critical  backbone of ‘Ibo country’, the Owerri, Aba and Umuahia (OAU  axis)  needed to end the war remained unyielding.

It was at this point that the nearly mythical ‘Black Scorpion’ – Col Benjamin Adekunle was directed to handover the Third Marine Commando to then Col Obasanjo in September  1968. In the shortest of time the hitherto impregnable OAU axis capitulated. This thrusted the death knell on the prosecution of the war by the Biafran side. No wonder, shortly afterwards, the Biafran Chief of Staff, Gen Philip Effiong left War Leader Odimegwu Ojukwu’s stronghold in far away Nnewi, which was closer to Benin where Danjuma was to travel to Port-Harcourt to surrender to Obasanjo on 1st January, 1970. It was thereafter that they proceeded to meet then Head of State, Gen Yakubu Gowon on 13th January for formal signing of instruments of armistice on 13th January and official announcement of end of war on 15th January.  MILITARY DEMOCRATIC

Thereafter, Obasanjo remained part of military strongmen who ruled Nigeria and indeed many other Africa during the decades 1970s and 1980s.

Having tasted political power, the military helmsmen across Africa, almost in an isochronic conspiracy refused to retreat to the barracks, country after country.  At last, it was again Obasanjo who broke the jinx by voluntarily and unilaterally stepping down the saddle of governance and handed over to a democratically elected democratic government in 1979.

This unarguably the first of its kind in Africa.

DIPLOMATIC ACTIVISM Departure from Dodan Barrack, Lagos (the name for Nigeria’s seat of government during the military years), opened  new vista of engagements for Obasanjo. Beyond going back to the farm  ‘from whence he was hewned’, he opened the Africa Leadership Centre. He retreated to the hitherto sleepy town of Otta in the outskirts of Nigeria’s former capital city, Lagos. As an intellectual activist, he soon became the face and voice of a new Africa searching for democracy and economic development around the continent.  He sat on virtually every international and multilateral concert, group or gathering on behalf of Africa. As a matter of fact, before Eguptian born, Boutrous Ghali or even our own Ghanian neighbour Kofi Anan, many canvassed Baba as the first Black/African Sectetary General of the United Nations. But God had other plans. So he blazoned the trail for other Ex African statesmen on post office life.  But Obasanjo soon found himself in trouble with then Nigerian military strongman, Gen Sani Abacha over his vociferous and plain-spokenness. These  ended him with charges of treasonable conduct.

Unlike playwright and rights activist, Ken Saro-Wiwa, in those ‘days of anomie’ he escaped the hangman’s gallows and was clamped into the dungeon of life-in-jail.

But acting his pioneering destiny, OBJ soon found himself in the seat of governance which he gave up twenty years before then. Previously uncommon in Africa, he became the first former military dictator to be so democratically elected as President. He again recorded several milestones, almost impossible to surpass by other successors in Nigeria or elsewhere on the continent. Just to mention.  It was with this new prestige and international respect that he successfully negotiated Nigerian relief from the yoke of external indebtedness in 2005. At the continental, working with South Africa President and Abdoulaye Wade of Senegal, the New Partnership for African Development  (NEPAD) was birthed

Another point comes to mind. Like Wole Soyinka’s depiction of ‘abiku’ phenomenon in Yoruba mythology, Nigerian democracy had been dogged by the malediction of inability to peacefully handover from one civilian administration to another. Alas in 2007, Baba was able to break the seeming evil spell as he successfully completed his eight year double tenures. He quietly handed over to the amiable, President Umar Musa Ya’ardua, whom he preferred calling ‘Umoru’ with an obvious Yoruboid accent. Today, that tradition has become part of our democratic heritage.

For students of history from the Niger Delta, a region whose neglect, deprivation and environmental despoliation remain a global discomfiture, the role of OBJ in the emergence of President Goodluck Jonathan in 2007 as Nigerian Vice President and four years later as Head of State, will remain indelibly resonated.

It was also OBJ that established the Niger Delta Development Commission in 2001.  He also created for the first time, Office of Special Adviser on Niger Delta in 2005 with a former Security Chief, Chief AK Horsfall, briefly as pioneer and thereafter, yours truly, succeeding him.

Even before anyone could say ‘Jack Robin’, please excuse the postcolonial hangover, OBJ had registered for a degree and afterwards a PhD in Christian Theology. Although, former Nigerian military ruler, Gen Yakubu Gowon had taken a similar path after his overthrow in 1975, his case was different in many ways. Understandably at the time, Gen Gowon went quietly to Warwick University, United Kingdom founded in 1965 with its scenic and establishmentarian ambience to study. Per contra, OBJ slogged it out locally and through the Open University of Nigeria; which he established as President, few years back. By this, has again demystified the arcane suspicions and prejudices against Distance Learning still looming sway in some quarters in Nigeria and around Africa.

A prolific and consummate writer, including letters ! He is one of the world’s most published statesmen.

In 2008, some younger Nigerian persons who had been privileged to work closely with Baba, piqued by the inclement political attacks, especially by the then unending probes by the  National Assembly on him, gossiped on how to talk Baba out of the national arena. They plotted and reechoed: let him focus on the ever welcoming and very appreciative global scene. From the cold of Swedish late winter cold, your truly conveyed our thoughts to him on his birthday. In his reply he stated tersely: “….l will continue to work more both here in Nigeria and for Africa”. True, since then Baba has continued to remain a bulwark of sorts; unassailing, irrepressible, effervescent and at times oracular and prognostic.

Even more are his sunny sides full of euphoric and cheery-hearted predilections; including his typical rhythmical sways and whirls. Obviously, the historic merit and esteem of Baba is just about to see a new chapter of resplendence open itself, as the script of his life of transcendental favour is far from been fully acted out. Thank God, his health and mental faculties are clearly ulbeat. That is what faith, fate and fortune seems to hold for him.

We wish him no less!

Reuben Abati: Soyinka And Nigeria’s Dinner With The Devil