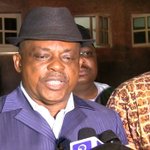 The Chairman of the Peoples Democratic Party (PDP), Uche Secondus, has announced that the party will soon commence electronic registration of members nationwide.

Secondus unveiled the party’s plan at a time when the chairman of the reconciliation committee, Hon. Henry Seriake Dickson, met with aggrieved members of the party, This Day reports

Speaking on Thursday, January 25, Dickson urged the aggrieved members to stay in the party and help to rebuild and reposition it for electoral victory.

Secondus, also at a meeting with the Forum of Ministers yesterday in Abuja, assured them that the leadership keeps an open door policy.

He further told them that the party would soon kick start the electronic registration of members nationwide as part of its reform strategy.

“The best way to go is organising transparent elections. He said the new NWC will not go the old ways but will have to abide by the constitution of the party. We will also devolve powers to the local level, away from the usual powerful people from Abuja,” he said.

Secondus said the NWC was also putting all the necessary strategies together and that by 2019, the PDP would be returned back to power by Nigerians since the APC’s has failed abysmally.