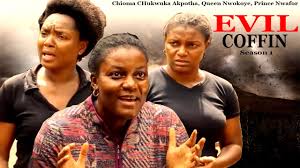 A deluge of claims against Hollywood film mogul Harvey Weinstein has sparked countless stories of sexual harassment in the social media #MeToo campaign, with women using Twitter and Facebook to recount experiences of being abused, groped, molested and raped by bosses, teachers and family.

Nollywood actors told the Thomson Reuters Foundation that sexual abuse and harassment was rife, but victims almost never spoke out.

Actresses in Nigeria said poverty forced many women in Nollywood to keep quiet about harassment for fear of losing roles.

In Nollywood, actors said there was tacit acceptance that sexual harassment was inevitable in the $3.3 billion industry which turns out dozens of films every week.

“There are a lot of people abusing their position and demanding sexual favours. I have had to turn down jobs, walk out of sets,” said Dorothy Njemanze, who has worked in Nollywood for 15 years.

“There are plenty, plenty times I didn’t get a part because I didn’t agree to sleep with somebody.”

A-List Nollywood actor Kanayo O. Kanayo said actresses called him every day to say they were being pressured to sleep with producers.

But actress Eeefy Ike said if you complained, people within the industry would wonder why you were making a fuss.

“I’ve worked in Hollywood and had experience with harassment there. The difference is that, in Africa, we don’t have any functional laws,” she said.

“There is also a lot of poverty. In Hollywood, if acting doesn’t work out, you can always go and get another job. In Nigeria, it’s difficult to get another job so there is (more) pressure on women to sleep with powerful men.”