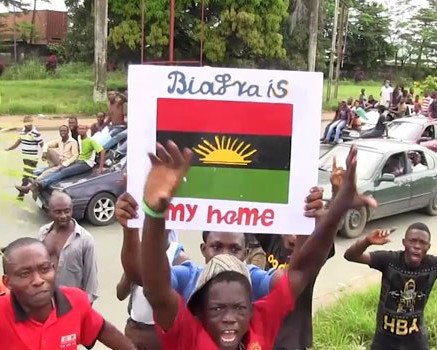 Ralph Uwazuruike, founder of the Movement for the Actualisation of the Sovereign State of Biafra (MASSOB), says the federal government is using Nnamdi Kanu to destroy the struggle for Biafra.

Speaking in the current edition of The Interview, Uwazuruike accused the Indigenous People of Biafra (IPOB) leader of waging war against Biafra.

He said it was regrettable that his efforts to achieve a sovereign state of Biafra “through peaceful means” were being ruined by Kanu who has been “sabotaged by security services to destabilise the struggle for Biafra”.

Uwazuruike said Kanu intends to ruin the Biafra agitation, starting with the November 18 governorship election in Anambra state which the IPOB leader has advised his followers to boycott.

“Nnamdi is fighting against Biafra. The security agencies have seen Nnamdi as somebody with a high value that they can use,” he said.

“They heard him shouting on radio and they approached him and he accepted to work with them.

“No election in Anambra State is aimed at favouring the All Progressives Congress (APC) to edge out Governor Obiano through destabilisation; that’s the only thing and it’s being arranged by the security agencies, using Kanu.

“I know the mansions that Nnamdi Kanu and people like him have abroad…let Kanu keep disgracing himself like he’s doing now, because I know he’s being funded and I know those funding him.”

Uwazuruike further described Kanu’s arrest and bail conditions as “a set up,” wondering why director of Radio Biafra who was bailed on health grounds “has not visited any hospital since his release from detention”.

The MASSOB leader also criticised the Muhammadu Buhari-led administration for “lacking the capacity to govern”.

According to him, the All Progressives Congress (APC) won an election “but didn’t plan” for governance.

He said: “If Jonathan had remained the president of Nigeria till today, the US dollar would not have exchanged for more than N50. Nigeria will still beg Jonathan to come back.”

Uwazuruike and Kanu, both Biafra proponents, have been on warring paths.

In June, he had said he was disappointed that Radio Biafra which he “handed over to Kanu has become something else” other than what it was created for.

Azu Ishiekwene, managing director/editor-in-chief of The Interview, described the current edition as “a rare insight into the complex and troubling identity politics confronting the country”.