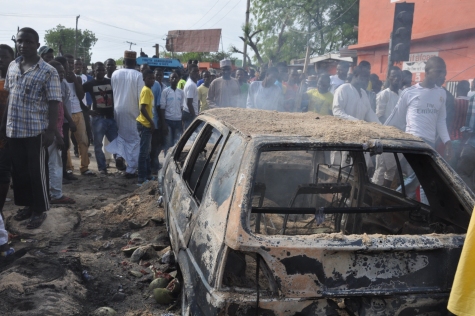 A spurt in attacks by Boko Haram Islamists has claimed nearly 400 lives since April in Nigeria and Cameroon, double the figure of the previous five months, Amnesty International said Tuesday.

The increasing use of suicide bombers — often young women and girls forced to carry and detonate explosives in crowded areas — has killed at least 381 civilians in the two countries, the rights group said in a statement.

“Boko Haram is once again committing war crimes on a huge scale, exemplified by the depravity of forcing young girls to carry explosives with the sole intention of killing as many people as they possibly can,” said Alioune Tine, Amnesty International’s director for West and Central Africa.

“This wave of shocking Boko Haram violence, propelled by a sharp rise in suicide bombings, highlights the urgent need for protection and assistance for millions of civilians… Governments in Nigeria, Cameroon and beyond must take swift action to protect them from this campaign of terror.”

Amnesty said at least 223 civilians died in Nigeria since April, underscoring that the real toll could be far higher.

Boko Haram is waging an insurgency in a bid to establish a hardline Islamist state in Nigeria’s mainly Muslim north.

More than five million people are starving as the fighting has devastated farmland, leaving farmers unable to sow or cultivate crops for several years.

“The recent spike in casualties has been driven by increased suicide attacks, with 30 –- more than one per week –- carried out since the beginning of April,” it said.

The deadliest attack took place in the town of Waza on July 12 when 16 civilians were killed and at least 34 injured after a young girl was forced to carry and detonate a bomb in a crowded video game centre.