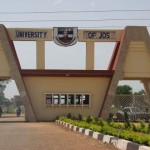 The authorities of the University of Jos has banned any form of indecent dressing by students.

The Vice-Chancellor of the institution, Prof Sebastian Maimako gave the directive on Wednesday during the matriculation ceremony for 7,000 students for the 2016/2017 academic session.

He also directed security agencies to arrest any student whose dressing assaults the sensibilities of the members of the university community.

The institution also warned that improperly dressed students would be barred from entering offices and attending lectures.

Maimako said 31,759 candidates chose UNIJOS as their first choice with 25,785 for the Unified Tertiary Matriculation Examination and 5,974 for Direct Entry in the 2016/2017 session.

The VC said although the social media had remained the vogue of the present society, it should not be used for negative reasons.

He said, “In line with the extant rules of the university, no student is permitted to publish anything concerning the university without the written permission of the vice-chancellor through the registrar.”