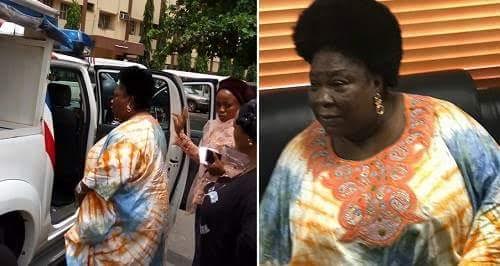 Mrs Taiwo Titilayo Momoh, who attempted to commit suicide by jumping off the Third Mainland Bridge was arraigned before an Ebute Metta Magistrate Court in Lagos on Monday.

It will be recalled that on March 24, a police patrol team rescued the 51-year-old textile trader after she tried to jump into the Lagoon. Momoh was in a taxi heading towards Oworonshoki when she told the driver to stop on the bridge, due to financial problems.

The accused was granted N500, 000 bail after she pleaded not guilty to a charge of attempted suicide. The presiding Magistrate, Magistrate T. A. Elias also ordered the defendant to undergo psychiatric evaluation before her next court appearance.

Momoh was arraigned by the Criminal Investigation and Intelligence Department (CIID), Yaba, on a one-count charge of attempted suicide.

Part of the charge reads: “That you Titilayo Momoh ‘f’ on the 24th day of March, 2017 at about 10:00 hours at Third Mainland Bridge, Lagos did attempt to commit suicide by jumping into the lagoon and thereby committed an offence under Section 235 Cap C17, Volume 3 of the Criminal Law of Lagos State, 2015.

The defendant pleaded not guilty.

Chief Magistrate Elias granted the defendant bail in the sum of N500, 000 with two sureties in the like sum, who must also show evidence of tax compliance. He ordered the defendant to submit herself to psychiatric evaluation and adjourned the case till June 1.

Related Topics:crimeSuicideThird Mainland Bridge
Up Next

The Failure of the Buhari Gov’t And His Health Minister Can No Longer Be Ignored, Death Toll In Meningitis Rises