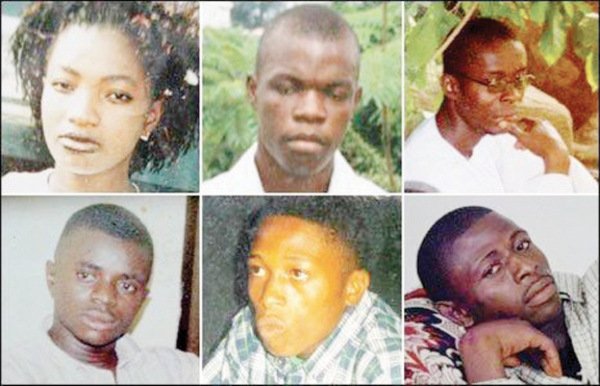 A Federal High Court in Abuja has delivered the much awaited judgment on the killing of six traders in Abuja by policemen on 7 June 2005.

Two of the policemen, standing trial, were sentenced to death, while three others were discharged, in the judgement delivered today by Justice Ishaq Bello.

Those condemned to death are Emmanuel Baba and Ezekiel Acheneje, while Danjuma Ibrahim, Nicholas Zakariah and Sadiq Salami were discharged.

The five were among the six arraigned over the killing of the traders  on suspicion that they were armed robbers.

The sixth person on the charge sheet, Othman Abdulsalam, who was the Divisional Police Officer in Apo, is on the run.

The accused persons were arraigned on a nine-count charge of conspiracy and culpable homicide, which contravened the provisions of Sections 97 and 221 (a) of the Penal Code Law.

Their victims were young traders, including a woman, aged between 21 and 25.

The defendants allegedly played different parts in the killing of the victims while they were returning from a night party on 7 June 2005 in Abuja.

Following their deaths and the subsequent public outcry, an official panel of inquiry was set up by ex- President Olusegun Obasanjo’s administration to unravel the plot.

The report of the panel said that the victims were at a nightclub located at Gimbiya Street, Area 11 in Abuja on the night of the incident.

The panel further said that a face-off had ensued between Ibrahim and the group when the female victim (Augustina) allegedly turned down Ibrahim’s love advances at the club.

Five policemen accused of the killings and eight other police witnesses had testified that Ibrahim, the senior police officer among them, had allegedly ordered the killings.

However, the defendants, including Ibrahim, had pleaded not guilty to the allegations.

NAN further reports that the provisions of Sections 97 and 221 (a) of the Penal Code Law with which the defendants were tried attracts death sentence.

Ailing President Buhari Pictured with Archbishop of Canterbury in London