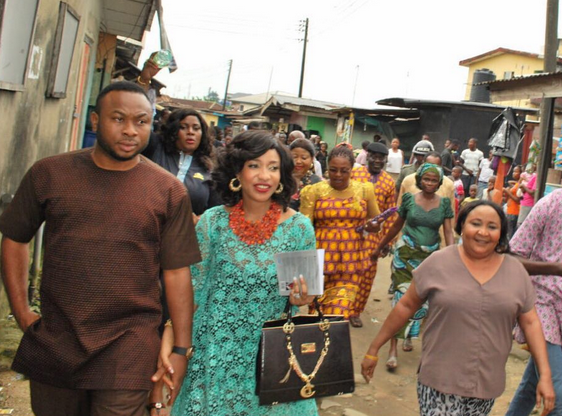 Churchill is alleged to be former President Olusegun Obasanjo’s nephew.

She made the revelation on her Instagram @tontolet while responding to advice from her fans persuading her to have a rethink over her marriage.

The Nollywood actress added she had been using her social media platform to lie and paint Churchill the good man he is today, as her union with him ‘was all a sham’.

According to her, all the cars and jewelleries she flashes on social media were not bought for her by him.

She wrote: “I posted stuffs my ex-husband bought for me doesn’t make it true. I used my platform to lie, to make him the man he is today.

The mother of one alleged that she treated so many sexually transmitted diseases (STD’s) while being married to Churchill.

“Nobody knows how many STDs I have treated or pain I know in marriage. If laughter is all they have then the karma that bites me awaits them all.

“Thank for your love. Yes no marriage is perfect but mine was based on gross lies deceit, scam and many more darkness.

“I loved the man no one begged me to, I take all the blame.”

“So don’t come at me with the bullshit of enjoying this man’s money.

“ I have not started talking, I will bare it all but there is time for everything.

“I care now for the STD’s because I am no longer naive. I am a mother who wants to live long for my child.

“I am not a saint and cheating is not the only reason I took the forever walk, “she added.

The controversial actress got married in 2015 to Oladunni Churchill,a Nigerian businessman and philanthropist, and they have a son from the union.

However, the separation crisis started when it was reported that a certain woman had stepped into the picture, with Tonto Dike removing her husband’s surname from her Instagram account.

The duo have been in a war of words on the social media, with Churchill demanding for exclusive access to his son.

Media Personality, Toke Makinwa Asked To Stop The Sales of Her Book ‘Unbecoming’