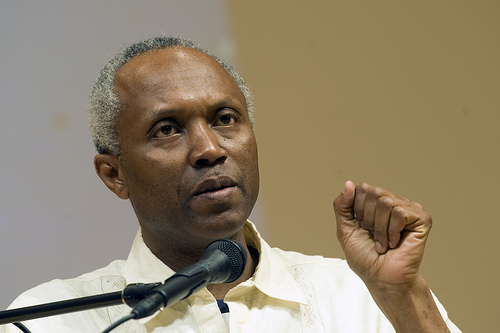 President Muhammadu Buhari should admit, today, not tomorrow, that his so-called war against corruption is unserious, tiresome, illegitimate, hypocritical, and a waste of Nigerians’ time. Right away, he ought to end the charade that claims to be a war. And then he should seek the best help he can find to focus on Nigeria’s grave economic and political crises.

Last week, the Nigerian Senate, citing the damning content of a security report, declined to confirm Ibrahim Magu as the chairman of the Economic and Financial Crimes Commission (EFCC). The senators would not divulge the details of the security report. However, the online publication, Premium Times, stated that it had obtained the report. According to the medium, the report accused Mr. Magu of fraternizing with persons who are targets of corruption investigations; of flying first class on a trip to Saudi Arabia, despite a presidential directive that public officials must fly economy; of illicit possession of sensitive documents, and of living in a house whose rent was allegedly paid by a businessman who was in the EFCC’s radar.

In other words, the Department of State Security (which authored the report on Mr. Magu) accused the country’s anti-corruption czar of being an enabler of corruption, a man embedded with the virulently corrupt.

I don’t know whether any or all of these allegations are true. At the time of my writing, several days after the Senate’s refusal to confirm Mr. Magu, President Buhari had said zilch on the issue. That presidential silence symptomizes a disease that afflicts the Buhari administration, a tendency to respond to the most everyday issue after maximal delay.

Juxtapose the presidential silence against the alacrity of Premium Times, and you begin to see how luckless Nigeria is in this Presidency. In revealing the content of the DSS report, the website also disclosed that its independent investigation exposed the falsity of the allegations against Mr. Magu.

After a dismal run with the Umaru Yar’Adua and Goodluck Jonathan administrations, the governance of Nigeria is yet again, with Buhari, debilitated, marred by paralysis, inertia, and confusion. And—if media reports are credible—there is a deep schism in the ranks of Mr. Buhari’s closest associates.

For months, the media had reported that elements within Team Buhari were working to remove Mr. Magu from the EFCC, or else to scuttle his confirmation. Those reports suggested that the anti-Magu coalition was bent on sabotaging Mr. Magu’s investigation and prosecution of the corrupt, inept and often laughable as that process had become.

Last week, a major newspaper reported that some presidential aides thwarted Mr. Magu’s attempt to meet with President Buhari to discuss the DSS report that apparently snagged his confirmation. If this doesn’t indicate a president held hostage by certain interests and forces around him, I’d like somebody to tell me how else to translate this.

There’s little question in my mind that confusion is writ large within the Buhari administration. And one is talking about confusion of the most fundamental kind, relating to self-identity. What is the character of the Buhari Presidency, the central quality that defines it?

Before his inauguration, many would have said that a militant antipathy to corruption was the defining characteristic of the Buhari dispensation. Today, that would be a joke. For all the theatre, this government has not done much better than its predecessors in the fight against corruption.

One significant reason for the administration’s ineffectual war is a crisis of conception. The soundest, most enduring move against corruption is to facilitate a society built on the stalwart foundations of the rule of law. A government that disdains the law, that is selective in its adherence to court orders, is itself corrupt—and, know it or not, fertilizes corruption. An administration that discovers corrupt people only in opposition parties, seldom in the ranks of its own political affiliates, is hypocritical. Such an administration may declare at the top of its lungs that it’s warring against corruption, but such protestation amounts to little more than lip service.

If Mr. Buhari were serious about combating corruption, he should have, from the outset, defined the nature, scope and approach of his war on the scourge. To adopt a system put in place by former President Olusegun Obasanjo was nothing short of lazy. Nigerians had become familiar with the pitfalls of Obasanjo’s anti-corruption program—its selectivity, the paucity of results (most of the cases filed since 2007 are still languishing in the courts), the entrenchment of corruption within the government that presumes—announces itself—to be at war against the monster of corruption.

Like Presidents Obasanjo, Yar’Adua and Jonathan before him, Mr. Buhari has long lost the moral capital to wage a serious anti-corruption war. An administration that has invited questionable characters to serve in its inner chambers, and one that looks the other way when legitimate questions about the financial assets of its functionaries are raised—such an administration can hardly be taken seriously when it proclaims itself a foe of corruption. As the Nigerian parlance goes, such a government is engaged in war “for mouth.”

I was just rereading the last pages of Chinua Achebe’s fourth novel, A Man of the People. In those pages, the narrator speaks about “a regime in which you saw a fellow cursed in the morning for stealing a blind man’s stick and later in the evening saw him again mounting the altar of the new shrine in the presence of all the people to whisper into the ear of the new celebrant…”

Those words illuminate the ethical bind in which the Buhari administration is caught. The handling of the Magu affair offers an illustration. How did this mess happen? President Buhari forwarded Mr. Magu’s name for confirmation, and the DSS, which regularly briefs the same president, submitted a devastating report on the president’s nominee. It’s evidence of deep-rooted incoherence or worse. It signals the existence of a fierce turf war going on right before the president’s eyes. And the president’s response is to keep mum, to watch the inelegant drama unfold and play itself out.

If Buhari is unable to put out that relatively small fire, pray, where is he going to find the stamina and insight to take on Nigeria’s burgeoning economic crises? And the economic news appears to worsen by the day.

Last week, the Nigerian Bureau of Statistics (NBS) revealed that 4.58 million Nigerians had lost their jobs since President Muhammadu Buhari’s inauguration. I’d suggest, in fact, that the picture of job losses is much worse than the NBS’ statistics suggest. As we know, the majority of state governments and local government councils are delinquent in paying their employees. The chief executive of a medium-level firm told me his company has had to lay off half of its workforce—more than 70 people. And it’s a struggle each month to pay the salaries of those who remain on the roll.

One sees little evidence that Buhari’s team has viable answers. I’d suggest, for a start, that it abandon the farcical pretense of fighting a war against corruption. Cut that drama that has produced no conviction of consequence in more than a year. Just stop it, period! And then, urgently, seek the help of knowledgeable people with expertise in steering an economy out of a stormy recession.

Goodluck Jonathan: I Ensured A United Nigeria As President & During The 2015 General Election