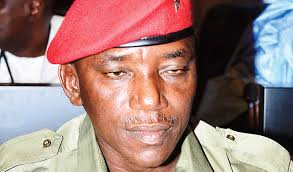 The Minister of Sports, Solomon Dalung has said that Nigeria does not need to attend the next World Cup competition to be held in Russia in 2018.

According to Vanguard, he made this known while speaking in an interview with Voice of America, Hausa Service.

He said that Nigeria is too poor to waste money on a competition (World Cup) that ‘stinks of corruption’, adding that Nigeria would ‘never win the trophy.

That competition stinks of corruption; that Nigeria is too poor to waste money on it and that Nigeria would never win the trophy.

The cup that we can win is the African Cup of Nations. There is nothing again that will take us to another man’s balcony in the name of the World Cup. We already have the Commonwealth Games and the Olympics. For these, we can attend such meets. But I am opposed to the World Cup. We don’t agree to it. Conspiracy in the World Cup is too much.

There is the issue of bribery and favouritism. There is also the issue of corruption before you are even given the hosting rights. We are here suffering from hunger and we don’t have money for such things. That is why, even if we try many times, once it gets into the politics of the game, we can never win.

That was why this year, we had to tackle him (FIFA President, Gianni Infantino) and we said, ‘you , Infantino, if you win this election, you have to give us a position. If not, we shall not agree’. And you see, by the grace of God, he even picked an African as his Secretary-General. That means he has started taking honey and rubbing on our lips. That means that one day, we shall get to really lick the honey.

The Super Eagles of Nigeria is leading Group B in the qualifiers for the World Cup in 2018 with a maximum 6 points after beating Algeria 3-1 in Uyo on Saturday.