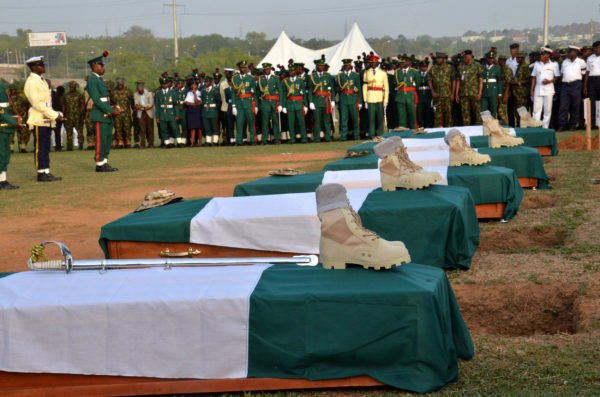 The Chief of Army of Staff, Lt.-Gen. Tukur Buratai, wept on Monday as he read the funeral oration at the graveside of the seven military men killed by Boko Haram terrorists.

They died when the terrorists attempted to seize Mallam Fatori on November 4 in an attack.

The soldiers were inducted into the Operation Lafiya Dole in 2014, designed to fight the Boko Haram insurgents and liberate the North-East from their hold.

“In these battles, they rescued children and women, fathers and mothers, the young and the old and restored peace and hope to Nigerian citizens.
At last, on Nov. 4, they paid the supreme sacrifice in the battle of Mallam Fatori,’’ Mr. Buratai said.

According to him, the deceased epitomised the very best of our military. They exemplified the values of our nation and the military which are loyalty, discipline, courage, selfless service, respect, honour and dignity.

Mr. Buratai said the deceased fought for the unity of the nation, adding that “your labour will never be in vain”.

He promised that the army would take care of their survivors.

Earlier, President Muhammadu Buhari, who was represented by his Chief of Staff at the occasion, Abba Kyari, said the deceased had shown unalloyed commitment to the nation.

“They were fearless, responsive, inspiring, selfless and dedicated to their duties.

“The selflessness of these gentlemen reinvigorate the memories of other great fallen heroes, who stood firm in the defence of our dear nation,’’ the president said.

Mr. Buhari noted that the deceased paid the supreme sacrifice in the ongoing fight against insurgency in the North-East, adding that their sacrifices would not go in vain.

He also noted that their contributions resulted in the restoration of normalcy in the region.

“It is, therefore, our resolve that the labour of these fallen heroes shall never be in vain,’’ he said, adding that insurgency and terrorism would be defeated.

The News Agency of Nigeria (NAN) reports that dignitaries who attended the funeral included the service chiefs, Governor Kashim Shettima of Borno, the minister of information and culture, and that of interior, and Senators Ali Ndume, Dino Melaye and Phillip Aduda.

The deceased were interred at about 5.55 p.m. after all necessary military ceremonies.