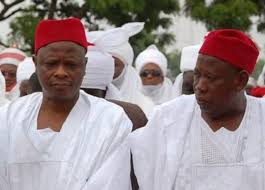 Kano state governor, Abdullahi Umar Ganduje said on Saturday in Sokoto that he will not probe the past government of the state.

“Yes, there is probe all over the country, but I will not probe the past Kano state government”

Gov Ganduje who admitted that his party, All Progressive Congress (APC) had some political challenges lately in the state, said however that the two people behind the crisis has been sack from the party.

According to him, the decision to sack the 2 persons was endorsed and signed by over 300 party chieftains from Kano state.

The governor, while answering questions from journalists insisted that they were in sokoto for a retreat on how best to make a political party stay alive as an institution that needed consistent support.

“We are here in sokoto in order to hold a retreat for our party (APC) officials. We are here to discuss issues pertaining to party as an institution. To design a change in party administration”

Amongst the changes the governor wanted should allow the party to ensure checks and balance behind the primary responsibility of recruiting those to contest elections.

While divulging that PMB’s political ideology of anti corruption was aimed at saving humanity, Ganduje decryed that parties often go into exile once a government is formed, governor Ganduje insisted that political parties must remain the backbone of any government.

“The type of change we want to bring is to ensure that political party remain the backbone of any administration. Political party is an indispensable organ in democracy.

“And therefore, a political party is something that should be nourished. Be assisted, an organ that should be strengthened so that we can widen participation within our democracy”.

“Some sadly had ideologies. Some had resemblance of ideology and some had political or ideological sentiments. But if you are talking of parties of now, the APC is a merger party. A party that is formed by different vestagges of defined political parties. And those vestages came with some element of ideologies.

“Therefore, APC is a party that is now harmonizing those ideologies into one political ideology. And luckily enough, Mr President from his countenance we know his Ideology.

“His ideologies is anti corruption, which is part of saving the common man. Saving humanity. I am not telling you that there is a well written ideology at the moment but I am telling you the APC has got all the elements that will lead to concrete political ideology”

The governor who admitted that measure is now been taking in Kano to help boost internally generated revenue, assured that, proceed from such revenue will be judiciously used for the people.