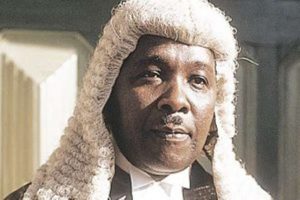 Many Nigerian may think that the menace, rascality and corruption in the judiciary started just yesterday. No it did not. It dates back to the 90s. Let me tell you how one Justice Ikpeme, a woman worked with the then President Babangida and Chief Arthur Nzeribe of the Association of Better Nigeria (ABN) to try to bungle the Presidential Election slated for Saturday June 12 1993 for a fee. Hear her story: on the night of June 11 1993(9:30pm) Justice Ikpeme of Abuja High Court working on the instructions of President IBB and Chief Arthur Nzeribe delivered a judgement that tried to stop the presidential elections slated for Saturday, June 12 1993. Even though the elections went on as planned, many Nigerians did not go out to vote because of Ikpeme’s Court order. IBB was later to claim that many people did not come out to vote and used that as an excuse to annul the June 12 1993 presidential elections won fair and square by Chief Moshood Abiola on June 21, 1993 on a sheet of paper. The struggle to de-annul and revalidate that mandate led to the eventual murder of Chief Abiola on July 7 1998 in Lagos.

Chief Alfred Rewane, Dr Omotshola, Admiral Elegbede, Admiral Akinterinwa, Toyin Onagoruwa, Bagauda Kaltho, Suliat Adedeji etc died. Thousands of Nigerians died in the June 12 struggle from 1993-1998. General Abacha himself died on June 8 1998. Please take notice that the Foundation laid by Justice Ikpeme led to the June 12 crisis and the tragedies recorded. The weight of Justice Ikpeme’s sin and the shame eventually led to her death. She did not live to enjoy the money paid her by IBB and Chief Arthur Nzeribe. The tide of public opinion on the matter left her devastated, sorrowful, dejected and rejected. Death became an option.

Between 1993 and 1998 when committed Nigerians were struggling for the revalidation of the annulled elections judgements were being issued left and right from High Courts across Nigeria. One will come from Ilorin, another from Rivers, another from Jos and yet another from Abuja etc. That was when the rot began to set in for the judiciary in Nigeria. Now let me take you to the world of Nigerian Newspapers on how they see corruption in the nation’s judiciary systems.

“War On Corruption: Delay tactics by the Judiciary” –Vanguard

Former President Obasanjo was determined to fight corruption to the fullest but he was frustrated by the judiciary that worked for the looters. Lawyers ran to high Courts in all part of Nigeria obtaining judgements and injunctions restraining the security Agencies to carry out their constitutional duties. Lawyers and judges made it difficult if not impossible for government to bring the looters to book. In an Editorial few days back, Punch warned about the danger of conflicting Court judgements. Hear Punch: “A protracted intra-party feud in the Peoples Democratic Party has resulted in Ali Modu Sheriff and Ahmed Makarfi leading rival factions, which at different times obtained conflicting judgments from Federal High Courts in Abuja and Port Harcourt respectively. The 2016 governorship election dispute in Abia State between Okezie Ikpeazu and Uche Oga – all of the PDP – and Appeal Court panels in Abuja and Ilorin decisions on public Order Act also elicited such judicial pantomime. These rules are making Nigerians nervous”

I am told also that Ayo Salami, a former President of the Court of Appeal was once quoted as saying that retired judges were deeply involved in bribing or intimidating judges under the guise of legal consultancy. In the 2015 disputed elections in Rivers State Appeal Court panels sacked all the State Assembly members, HOR members, and the Senate including Governor Wike. At the Supreme Court Wike was returned as the Governor while the State and National Assembly members sacked for the same malpractice were never returned. What happened? Money exchanged hands among the Supreme Court judges. A certain officer of the PDP was before a High Court in Abuja for deeping hands into the funds meant for Arms to dislodge Boko Haram. Each time the man appeared in court we noticed that some so-called Senior Advocates of Nigeria were lining up behind the accused even after promising to return the loot. What will you call this? Corruption!

For the judiciary, I think that we have a catalogue of woes in our hands. Their woes have gone full cycle. Every honour, every respect, every dignity and every importance attached to the judiciary has been eroded with frightening speed in the past 25years. The conducts of judges, Magistrates, and Lawyers have made some of us to begin to ask questions about the so-called learned profession. Are the lawyers immuned to issues of justice? Are they untouchables? Are they above the law? Are the lawyers exempted from our criminal justice systems? Can lawyers do no wrong? Can’t the lawyers or judges be prosecuted? Can’t they be jailed? Can’t they face the firing squad? Are they special people that are exempted from facing the jury? What is this noise about evading the homes of judges by DSS?

In trying to find answers to these questions, I have tried to read how other civilized countries handle their criminal justice systems and I discovered that judges, magistrates, lawyers have faced the juries and paid for their sins. Nigeria is not going to be an exception. Nigerian lawyers have arrogated themselves to the position they do not deserve. They have arrogated themselves the honor, respect and carriage they do not have. Law is no respecter of any person. Lawyers must be brought to justice if they breach the laws of the land.