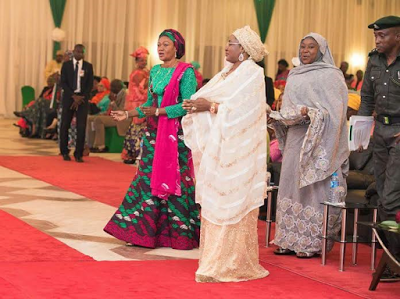 The Deputy National Publicity Secretary of the governing All Progressives Congress, Mr. Timi Frank, has said comments made by the Wife of the President, Mrs. Aisha Buhari, were a reflection of the feelings among many party members.

Frank was reacting to the interview granted by the President’s Wife to the Hausa Service of the British Broadcasting Service, aired on Friday.

Mrs. Buhari had expressed her frustration over the treatment meted out to party loyalists by those she said didn’t play any role in the ascension of her husband to the Presidency but were now calling the shots.

The APC spokesman, who expressed his opinion in a statement he signed in Abuja, on Friday said, “I think Mrs. Buhari deserves commendation because she is actually speaking the minds of not only the party members, but Nigerians.

“What Mrs. Buhari has said is not different from what some of us have been saying that it is high time the President shook up his cabinet and brought in people who understand the manifestoes of the party and can help the party deliver on its change mantra, especially in the area of the economy of the country which needs urgent attention.

“Some of our leaders like the Senate President, Dr. Bukola Saraki, have made this same observation in the past and I think they meant well for the administration and the country. I will also join them in appealing to the President to do the needful.

Frank also said, “Nigerian women in politics and other wives of President in the world have a lot to learn from what Mrs. Buhari has done.

“We should not forget in a hurry that this is what the former first lady Mrs. Patience Jonathan failed to do to her husband when few people hijacked his government and brought the government down.”

The APC spokesman urged the President to act fast and correct some of the issues currently threatening the existence of the party.

He, however, cautioned members of the opposition against misinterpreting her comments because she made her feelings known in good faith for the betterment of Nigeria and Nigerians.