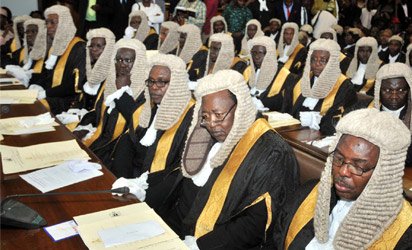 Apart from the seven judges that were arrested by the Department of State Services on Friday and Saturday, eight other judges are being investigated for corruption by the DSS.

A top Federal Government official, on Sunday said that no fewer than 15 judges, included the seven arrested, were being investigated by the DSS.

The official said the judges were being investigated based on various petitions which accused them of corruption.

The DSS had, in what it called a sting operation, arrested Sylvester Ngwuta and Inyang Okoro, both of the Supreme Court; the suspended Presiding Justice of the Court of Appeal, Ilorin Division, Justice Mohammed Tsamiya; Justice Kabiru Auta of the Kano State High Court and Justice Adeniyi Ademola of the Federal High Court, Abuja.

Others arrested were a former Chief Judge of Enugu State, Justice I. A. Umezulike, and Muazu Pindiga of the Federal High Court, Gombe Division.

It was gathered that besides the judges, the DSS had invited three court registry staff across the country as part of the investigations into the alleged corruption in the judiciary.

“Currently, we are investigation 15 judges, including the seven that were arrested. Three court registry staff have been invited and quizzed. We have facts and figures,” the source stated.

The government official faulted a claim that the DSS acted unilaterally without carrying along the National Judicial Council.

He stated that the Service sent letters to the NJC and the Ministry of Justice concerning the investigations of the judges.

According to him, while the ministry responded, the NJC did not respond, adding that the DSS did not dramatise the arrest of the judges as alleged.

The government official also explained that the fact that the judges were under the authority of the NJC did not exclude them from investigation and prosecution.

He said, “They have no immunity. Even those (governors), who have immunity, can be investigated. There are many professional groups, including the Nigeria Union of Journalists; if you commit a crime, besides facing disciplinary actions from your union, you should be investigated and prosecuted according to the law of the country.”

The source insisted that the DSS did not act outside its constitutional mandate by investigating the judges.

Giving an insight into the allegation against some of the judges, he alleged that some of them received bribes to compromise judgments.

He also cited the case of a judge who owned a N1.5bn estate, alleging that granting of bails to defendants had been turned into an avenue for making money by some judicial officers.