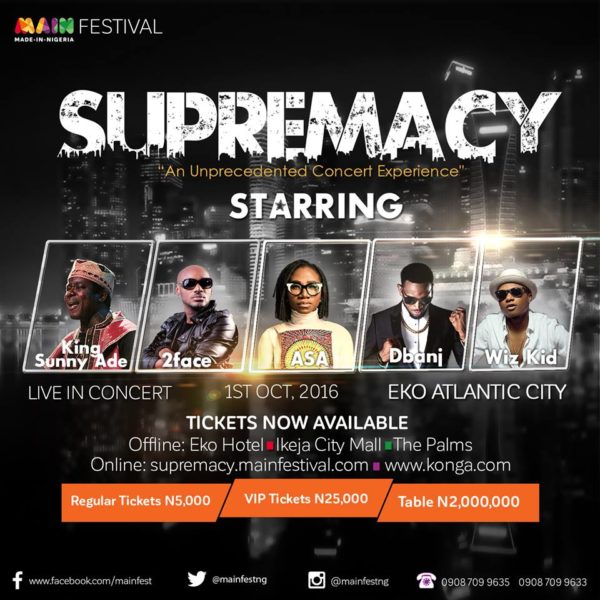 The organiser of highly anticipated Supremacy Concert has said the selection of KSA, Dbanj, Wizkid, 2face and Asa to perform at the concert is based on the need to provide entertainment that cuts across age, gender and preference.

‘we are catering for people from two generation and different taste and preference when it comes to entertainment. Our focus is not just on youths or upwardly mobile, we are catering for the corporate guys and the elderly. If you don’t like KSA, you will like Wizkid, and if your preference is soul music, Asa wil be on hand to provide that and as always 2face will be dishing out his classics from hip hop to contemporary Afro pop. And the pure entertaining energy of Dbanj will cut across as well. So it is not a concert restricted to a particular audience’ Jide Oyalowo who works in the media part of the concert said.

The much-talked-about Made-in-Nigeria(MaIN) Festival have lined up an impressive list of performers for the maiden edition of the Supremacy Concert to hold on October 1 at the Eko Atlantic, Lagos.

The Supremacy Concert will be the climax of a seven-day event which would attract dignitaries such as His Excellency, the Vice-President of Nigeria Prof. Yemi Osinbajo, Senate President Dr. Bukola Saraki, Alhaji Aliko Dangote, CBN Governor Mr Godwin Emefiele, Minister of Power, Works &

The Made-in-Nigeria Festival is being organized by MaIN Group, a collaboration of private sector organisations. Board of Advisors of the initiative include: Prince Adesegun Oniru, Mr. Aliko Dangote, Dr. (Mrs.) Stella Okoli, Mr. Ronald Chagoury, and Senator Oluremi Tinubu.

The music concert will feature music acts such as King Sunny Ade (KSA), Asa, Dbanj, 2Baba and Wizkid. This would be the first time these entertainers would grace the same stage in the history of music concerts in Nigeria.

Tickets for the concert are being sold on the organisers’ website, www.supremacy.mainfestival.com or www.Konga.com.

KSA who started his music career in the 60s is known for his captivating voice and electrifying dance steps which has endeared him to many. He has many blockbuster hits to his credit among which is ”Merciful God”, ”JaFumi”, ”Sweet Banana”, ”Aiye Nreti Eleya Mi” and others.

2baba is regarded as one of the stars of the decade as he is unarguably one of the country’s best exports ever since he released the hit single ”African Queen” which made the album go platinum.

Asa is an internationally acclaimed singer and song writer who has sold more albums than her contemporary acts, she performs in and out of the country at will.

Dbanj is not doing badly as he is not just a musician but an entertainer and businessman all in one. He is known for his stage craft and he is a fans’ favourite.

Wizkid is the only Nigerian artiste to have been featured by more than three International artistes this year alone. Canadian Rapper and Song-Writer Drake featured him in his song ”One Dance” a track which was number one in the US and the UK for several weeks.