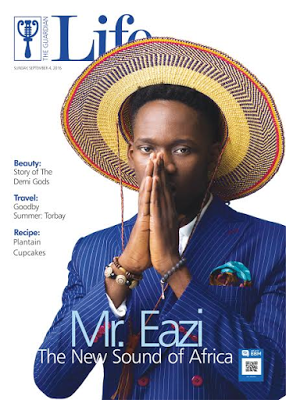 Tosin Ajibade, aka Mr. Eazi, is the musical whirlwind that has recently taken over the African music industry and has continued to do so at an incredible pace.

He is a Ghanaian – Nigerian World music recording artist whose sound is heavily influenced by a mix of genres that has allowed him to create a totally different sound; pioneered by him.

Why the name Mr. Eazi? He told us that while studying for his B.SC in Mechanical Engineering, he always ended the promo bulk SMS he did for shows with ‘’Be Easy” and it stuck.

Talking to Mr. Eazi was an insight into the new sound that Africa is ready to share with the world; the new class of artistes that we will be serving to the world. These new talents are not just about the lyrics and the beats, but are embodiment of talent, hard work and persistence. They are set on making an impact and are not swayed by the rush of fame.

In a recent tweet, you gave us a run down on your journey to this point so far, can you describe the experience?

The thing is that I went to school to study Mechanical Engineering because I thought that was the only way of making money. When I get into school, I found out that the students there loved luxury, so I used my school fees at the time which was $5,999 to buy a car that was used like an Uber. The taste of that entrepreneurship sparked something in me and I decided that I didn’t want to be an engineer, I wanted to own my thing and control my own flow. I created Swagger Entertainment in Ghana which pioneered the party culture in Kumasi, Ghana and all of this was done in my 2nd year. I did that till my final year and that gave me a strong relationship with top acts in Ghana and Nigeria. That took me from mechanical engineering to events, which took me to the studio and I started recording in my final year. I worked with Schlumberger in Nigeria when I graduated. I was good at it, but it was not for me and I felt like I could do something bigger. I went back to Ghana for my MSc and I knew that was the only way for my parents to give me time to follow my dreams. My classes were on the weekend so that gave me ample time. I started with importing La Casera to Ghana but I wasn’t experienced in business and it became boring because of the profit margin and the stress involved. I got introduced to mining which was influenced by my MSc thesis and it piqued my interest. I was so fascinated and spent most of my time breaking the ground and mining gold which was very lucrative. I felt it could be bigger so I took a loan of $100,000 from a V.C but the V.C became greedy and that ended that relationship. I started the sharwama business because there was no sharwama in Kumasi. I got people to make the sharwarma from Nigeria and that quickly became a huge success. At that time, the gold money stopped because the government legalized it and I didn’t want to get into trouble with the law. The recent development gave me time and some friends took me to the studio and we recorded my first E.P About To Blow in one week which had Bankulize. Towards the middle of 2014, I decided to return to Nigeria and the opportunity came while I was looking for investment for my mining, because I needed $100,000 to do mining with equipment. I started searching the internet and I ran into a fund by 440NG but they only invested in the tech businesses. I met a friend who was doing a phone business and we rebranded it to an e-commerce platform and we got the initial investment funding, but my partner got greedy and we had a falling out. I had to step out of that business and I started my business Phone Trader in partnership with Airtel and by L5Lab. It was in-between starting my own business that Jules came through with what he had done with Bankulizeand it was getting massive airplay in Ghana. I didn’t go back to Ghana till December 2015 for Sarkodie’s show where he invited me to perform (between that time we had droppedBankulize and Skin Tight), so I got on the stage and people were screaming and I was amazed. I was still doing my business, and it wasn’t until we went on our first tour in March that I realized that this was really happening.
I feel like it is still the same entrepreneurship story and the music has paid for itself. We invested about N450,000 in terms of investment and according to the ROI ratio this has been my most lucrative venture. So why not just continue with it.

According to notjustok.com, your music brand is “Banku Music”, can you explain that genre of music?

Banku music is actually World music that is African based. For instance, you want to upload a song on iTunes, you click on Afrobeats but there is no Afrobeats, however you have World music which is generally used to categorize music that does not fall into any category or a music genre that is not big enough to acknowledge. In my case, my influences are from everywhere; RnB, reggae, hip-hop, afro pop. It is a mixture of different influences that combine as world music that everybody no matter the race can relate to. I call it Banku because Banku (the meal) is a mixture of different ingredients, just like my music. And anytime that I eat Banku, I become sleepy and relaxed and, coincidentally, I recorded most of my tracks after eating Banku and you can feel the lazy chilled delivery with most of my songs.

What has been your major inspiration in life?
It has just been about following my dreams. For me, I always say, once I dream it, I live it. I feel like there is just one life to live so why restrain yourself? If God gives you the opportunity to be multiple things then go for it; there is no loss at the end of the day. When you die, you won’t go with anything, everything is vanity and the only thing that really counts are the experiences which includes your relationships with people, and traveling to places. These are the tangible things and they have weight. For me it has been enjoying life and following my dreams and of course God has been blessing everything I do.

What’s your take on the Nigerian and Ghanaian music industry, since you infiltrated them so well?
I feel the Ghanaian and the Nigerian industry are different. The Ghanaian industry is vibrant but laid back, there aren’t many artists like in Nigeria. The sound is different; a lot of things can work in Ghana that can’t work in Nigeria. Ghana is a very good place to start, especially for an artist that puts out the kind of music that I do because Ghana gives you a listening ear unlike Nigeria were for every genre and sub-genre there are a thousand artists doing it.

When you catapulted into the spotlight, there was an argument as to your nationality. So where is home for you? Ghana or Nigeria?
Right now, I am just a roaming ambassador. I haven’t even been to Ghana in a while. I thought London was my home two weeks ago, then I thought Houston was my home and now I think Lagos is my home. For me, I feel there is no home. You see the Fulani cap I carry, mostly worn by herdsmen, it signifies that I am a Kubolor; I just move like an African gypsy. There is no home, we just move as the pastures direct us.

We saw some clips from your UK tour and the reception was almost unbelievable. How does being in the limelight feel?
For me, it is just a blessing. I am just observing, I am not going to lie and say that at some point that we did not think of these things happening but there was no real push. Everything has come as a blessing and when you realize that it is a blessing and not as a result of anything you have done, you can only watch and that is what I am just doing at every show, concert and fan meeting. It motivates me to continue.
Future projects you are looking forward to?
For me and my team, we are heavy with on-the-road projects because I am a Kubalor. I like traveling and music has given me a reason to travel. We are on the Life Is Eazi series, my album is going to be called Life is Eazi Vol. 1 and then the tour is like a pre-album tour in London, Ghana and Europe. In November we have Dirty November in the U.K, we have some shows with Lauryn Hill. Basically, it is build up to the Life Is Eazi album and next year we would be doing Life Is Eazi Africa; touring in 14 countries before the album drops. When the album drops, we will start another tour Life Is Eazi Album Tourwhich will take us to every continent by God’s grace, until we are famous in China.

Advice to young people
Follow your heart. The fact is that anything you want to do, be it positive or negative, if you set your mind to do it and ginger towards it, it will happen. So, just focus on the positive. I mean, Hitler did all that he did with just willpower and that shows you what willpower can do. So don’t stop.
It is safe to say that Mr. Eazi is Africa’s Big Thing right now, and this is not about the hype. It’s really more about the personality behind the mic. He is not your average Nigerian musician basking in the euphoria of the spotlight, but a focus-driven and seasoned entrepreneur who sees everything as an opportunity. When you think about it, it is a blessing to the industry. He has created no limit to the feats he can achieve, and this is the mentality of the most successful people on the planet, past and present. Taking a cue from Mr. Eazi, go through life following your heart and, most importantly, take it easy.

Mariah Carey Wants To Break The Internet With This