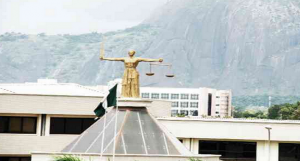 An Ikeja Magistrates’ Court which gave the ruling also granted Gbadebo two sureties in like sum, as part of the bail conditions. The Magistrate, Mr A. A. Adesanya, said the sureties must show evidence of tax payment to the Lagos State Government.

He adjourned the case to Sept.12, for mention. Gbadebo, of no fixed address, is being tried for intent to commit felony and stealing. Earlier, the prosecutor, Insp. George Nwosu, told the court that the accused committed the offences on Aug. 7 at No. 2, Adeosun St., Oko-Oba, Abule-Egba, Lagos.

“When the complainant discovered that her belongings were not where she kept them, she raised an alarm.

“Her neighbours pursued and apprehended the accused and all the stolen items were found on him,’’ he said.

The offences contravened Sections 285 and 306 of the Criminal Law of Lagos State, 2011. Section 306 provides a five-year imprisonment for convicted offenders, while Section 285 prescribes a three-year jail term for the offence.The accused, however, pleaded not guilty to the charge.