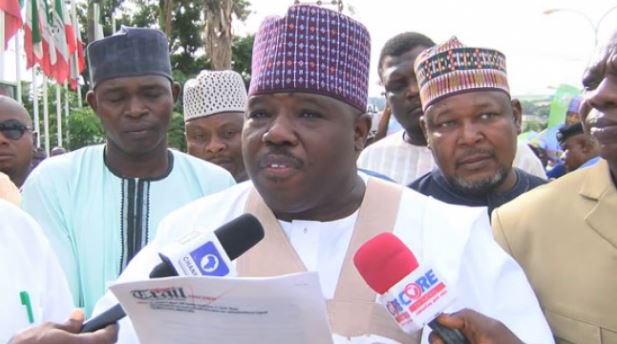 Sheriff told journalists at a news conference in Abuja that the PDP lost the two states because the ex-president refused to heed to his advises.

”Yobe and Borno are one and they will remain forever. I am following the trend of events in Yobe very well and I believe that PDP should never have lost Yobe at all.

”If the then president, Jonathan, had listened properly and we did what we had intended to do, by now we would have had the two states – Borno and Yobe.

”But unfortunately, whatever God decides, we will accept it and we cannot do otherwise,” he said.

On reconciliation between his faction and Sen. Ahmed Makarfi-led National Caretaker Committee of the party, he said: ”Members of the BoT are coming to see me.

”Even, last night they came to meet me at my place and the governors are also meeting with me.

”But, that does not mean that we are going to agree on anything that will affect our integrity, followership and our political interests.

”As some of you rightly said, ?some of them were ashamed to identify with the party.

”Now the PDP has become a strong party, everybody is looking up to PDP and we will not be distracted.

“This party, as I rightly said, must be returned to the owners. Anything short of that is a non-starter.

”What are our problems? How do we improve our standing, so that it is not when we want to go for election that we run around to put the house in order?

”It is now that we should put the party in proper shape ahead of the election period,” Sheriff said.

He expressed joy with the leaders of the party in Taraba, saying that people should always be allowed to chose who they want to lead them.
(NAN)