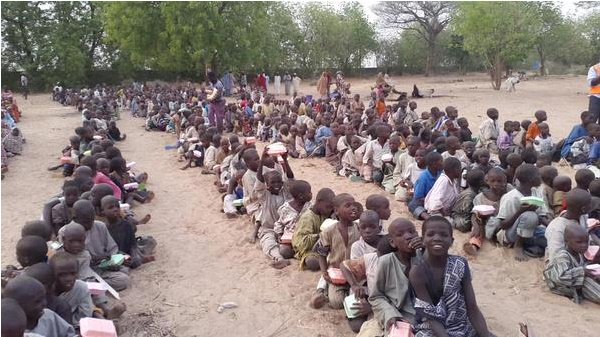 Saraki Calls for Calm as UN Humanitarian Convoy is Attacked

– Calls on UN to resume activities

Senate President, Dr. Abubakar Bukola Saraki, on Friday called for calm as the United Nation’s announced that it would be suspending aid deliveries in Nigeria after a United Nation’s Children’s Fund (UNICEF) humanitarian convoy was attacked while travelling from Bama to Maiduguri in Borno State.

Saraki in a statement by his Media Office, condemned the attack in the strongest possible terms, stating that it was unacceptable to endanger the lives of aid workers, who were only trying to assuage the situation in the North East.

“This unfortunate situation has led to the United Nation’s temporarily suspending its rehabilitation-related aid deliveries to parts of the North East,” the Senate President said, while adding that “this is a major cause for concern as overtime, the Nigerian military has recorded significant successes in routing the insurgency and many foreign donor agencies have expressed their preparedness to join in the North East restoration efforts.”

Saraki further called for an immediate review of the security situation in the North East by the relevant authorities, stating that it was necessary to alleviate the concerns of international partners who are set to help rebuild the crisis-torn areas.

“I also urge our military, the Department of State Security and the Police, to commence an immediate security re-evaluation and review of the entire North East zone in order to allay the fears of our donor partners. The partners are important to Nigeria’s work to reposition the North East after months of decimation at the hands of Boko Haram”, he stated.

With the temporary suspension of the United Nations’ activities in the region, the Senate President called on the Presidential Initiative for the North East (PINE), National Emergency Management Agency (NEMA) and other relevant agencies to immediately address the shortfall that will arise from the cessation of donations of food and medicines.

“Effective action must be taken in the interim. We need to make sure that no lives are lost due to the temporary suspension of UN aid”, he added.

Saraki further called on the UN to resume its activities in North East as soon as possible, while reassuring Nigerians and the international community that the Senate would fast-track the passage of the North East Development Commission (NEDC) Bill, which aims to create a legislative framework and multi-state platform for the coordination of relief and donations to the zone. Following the submission of the Report of its Public Hearing by the Senate Committee on Special Duties, the bill Following the bill is awaiting third and final reading before being passed.

The Senate President had on July 18 led a delegation to Maiduguri in Borno State where he pledged that the Senate would look into the issue of malnutrition and shortage of medical supplies in the North East. DC Bill is currently awaiting its third and final reading in the Senate.

Two days later, through a Point of Order raised by Senator Baba Kaka Garbai (APC – Borno Central), the Senate discussed the issue of malnutrition in the North East and resolved that the Ministry of Finance should immediately release necessary funds to the North East while the Federal Government should begin coordination of private sector donations to the region.

During the debate on the motion, Saraki emphasised the need for a sustainable public-private-partnership driven approach to combat the issue of malnutrition, stressing that Nigeria did not need to lose more lives to the lack of food in the North East.

Meanwhile, the Chairman of the Presidential Committee on North East Initiative and as well as the Chairman Victims Support Fund has expressed sympathy with members of the UNICEF and IOM humanitarian response team who were attacked by Boko Haram insurgents on their way from Bama to Maiduguri after delivering food, supplies and medicine.

Gen Danjuma said, “The attack on humanitarian NGOs who are in the North East to save the lives of hundreds of thousands of internally displaced families is shocking to all Nigerians.

“It is tragic that men and women who make great sacrifices to save the lives of starving and sick people in the North East have become the target of insurgent attacks.
Danjuma assured the UN Office for the Coordination of Humanitarian Affairs that military presence will be beefed up around all humanitarian crisis centers to ensure a safer zone for providing food, medicine and nutritional help to those in need.
He also wished the injured soldiers that protected the humanitarian convoy a quick recovery and praised the gallantry of the soldiers for saving the lives of humanitarian workers.