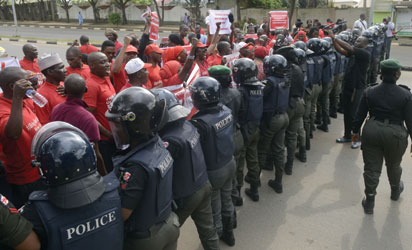 The abduction of over 200 girls in their school in Chibok, Borno State in April 2014 drew a lot of attention to Nigeria with the former President Goodluck Jonathan’s administration under tremendous pressure globally to rescue the girls.

One group that has been in the forefront of campaign for their rescue is the BringBackOurGirls Movement. The group’s strategies which include regular sit-outs at the Unity Fountain in Abuja put the Jonathan administration on the spot to the extent that members were accused of working for the then opposition All Progressives Congress to unseat Jonathan.

The Minister of Agriculture, Chief Audu Ogbeh, tactically confirmed that argument when he spoke at an event during which President Muhammadu Buhari formally declared his intention to contest the 2015 presidential election. “We commend the #BringBackOurGirls movement led by members of this party. We thank them for their commitment to Nigeria because they remain the only living evidence that Nigeria has a conscience,” he had said.

Although the movement has sustained its campaign during this administration, it is no longer news that some leaders of the group are currently in government, hence can no longer be actively involved in protests that will paint the government in bad light. For instance, Hadiza Bala Usman was during the week named the Managing Director of the Nigerian Ports Authority. This is apart from the fact that she is a member of the Presidential Advisory Committee Against Corruption headed by Prof. Itse Sagay. She was, until her latest appointment, the Chief of Staff to Kaduna State Governor, Nasir El-Rufai.

Another prominent member of the group, Mrs. Maryam Uwais, has been appointed the Special Adviser to the President on Social Protection Plan. Dino Melaye who also took active roles in the group’s protests in 2014 and early 2015 has since been elected a Senator on the platform of APC. When a rescued Chibok girl, Amina Ali Nkeki, visited Buhari on May 19, Usman and Uwais were the only known members of BBOG that accompanied her. In fact, it was Usman that was holding the girl to protect her from journalists while Uwais took the responsibility of carrying the girl’s baby.

The Presidency must have expected the group to soft pedal. But other members of the movement such as Dr. Oby Ezekwesili, have remained undaunted. Recently, they were quoted as saying Buhari had broken all promises made to them about rescuing the girls.

The Presidency was uncomfortable with that. The Senior Special Assistant to the President on Media and Publicity, Garba Shehu, responded sharply to the allegation. The tone of Shehu’s statement showed that he tried hard not to be too harsh on the campaigners. Despite this, he let loose some of his anger when he described the claim as “riveting and dispiriting claim.”

He also made it clear to the campaigners that although the girls had not been rescued, the about 15,000 other captives so far set free by the nation’s military are also as important to the government as the girls. “This huge number (15,000) of rescued women and children may not be prominent names and their disappearance may not have generated any massive media attention and campaign. However, their liberation is just as important as that of every other missing woman and child,” he said.

It is glaring with the statement that the Presidency has started seeing activities or utterances of the group as affront. If this continues, I foresee a situation where the government of the day will also turn around one day and accuse the movement of being sponsored by opposition Peoples Democratic Party.

Osinbajo and the restructuring controversy

Since the inception of the present administration on May 29, 2015, Vice-President Yemi Osinbajo has not shied away from attending programmes outside the Villa. Apart from paying official visits to some states and attending social functions in some others, many individuals had also invited him as an academic to deliver lectures. He has been delivering such lectures in churches and schools among others.

Penultimate Friday afforded Osinbajo another opportunity to deliver such lecture. The venue was the Elizade University, Ilara-Mokin, Ondo State, where he delivered the institution’s second foundation lecture titled “The future is here earlier than we thought.” After delivering his speech, he also answered questions from the audience.

Last Saturday, newspapers published stories from the event with most of the stories written from the angle of the Vice-President tackling Niger Delta militants who have been embarking on renewed violence in the region. On Sunday, his Senior Special Assistant on Media and Publicity, Mr. Laolu Akande, came up with a press statement capturing other things said by his principal at the event which were largely unreported.

One of such areas which Akande felt Nigerians should know was the Vice-President’s position on the growing calls for the restructuring of the country. He quoted Osinbajo as saying that restructuring would not make any difference, adding that calling for restructuring of the country simply because the Federal Government controls a bigger portion of the resources may not be helpful. “Even if states are given half of the resources of the Federal Government, the situation will not change. The only change is to diversify the economy,” the Vice-President was quoted to have told the gathering.

That statement attracted criticism from the pan-Yoruba socio-political organisation, Afenifere, among others who felt that Osinbajo missed the point. At a point, I felt his spokesman would have regretted issuing the statement.

The Vice-President’s side obviously did not want to keep quiet on the matter while Osinbajo was being taken to the cleaners. So when the issue came up during a phone-in programme on a private television station on Tuesday, Akande called the station on the telephone with a view to putting his boss’ position on the matter in perspective. Along the line, Osinbajo himself offered to shed more light on the issue and he took over the telephone from his spokesman.

Akande again quickly recorded the conversation the Vice-President had with the television crew and sent out its transcripts later in the day. Osinbajo made it clear that he was opposed to a regional arrangement for the country but he was in total support of the call for state police.

The Vice-President also said he had always been an advocate of fiscal federalism which will lead to states having more resources, recalling that he approached the Supreme Court about 10 times as the Attorney General of Lagos State on the issue. He also said his position on the Value Added Tax was that the issue must be a state matter. Although he supported the creation of state police, Osinbajo opposed the idea of restructuring the country along ethnic lines or returning to regional structure.

President Muhammadu Buhari has been criticised many times since he took over, but I guess that was the first time Osinbajo was receiving his own “baptism of fire.” That was what informed his coming out to shed more light on his position. I hope that in the days ahead, he and the President will be coming out more to engage the people who voted for them in the last elections.

Pius Adesanmi: The Indictment of the Nigerian Army for the Zaria Massacre

Opinion: To Hell With Dino Melaye, Senate of Thieves And Forgers