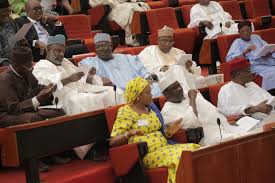 Senators Suileman Othman Hunkuyi (APC Kaduna North) and Kabir Marafa (APC Zamfara Central), had spearheaded the rumpus with support of some of his colleagues and called for the withdrawal of the petition that initiated the criminal prosecution of Senate President Bukola Abiku Mesujamba Saraki and his Deputy, Ike Ekweremadu. The executive session was chaired by one of the forgers of the Senate Standing Rules, Bukola Abiku Mesujamba Saraki.

“Shortly after that,” SaharaReporters informs us,“Senator Dino Melaye (APC Kogi West) said in his remarks that the Attorney General of the Federation, Abubakar Malami, must be brought before the Senate to be thoroughly grilled and humiliated for charging the Senate leadership with forgery in court.” “Mr. Melaye called on the Senators in attendance,” continues SaharaReporters, “to fight the presidency to a stand still. In his rant, he issued a wide variety of threats.” “Recognized to speak, adds SaharaReporters, “Senator Remi Tinubu (APC) Lagos Central said the Senate should not be reduced to a kindergarten where Senators could just issue childish threats, and called on Senators to close ranks and seek reconciliation amongst its members.” SaharaReporters further reports that “That was when Melaye flew into rage, calling her names. I will beat you up on this floor and nothing will happen, he threatened.”

Given the history of the Kogi Senator as a wife beater and women molester, no one should be surprised that Melaye threatened to beat another man’s wife. Once upon a time, Melaye physically assaulted his ex-wife Tokunbo. In a story published in busidiqu.com December 22, 2013 written by Fejiro Oliver says “… her battering by Dino left her with injuries all over her body.” “According to Tokunbo,” writes Fejiro, “he had also pointed a gun at her threatening to kill her, and nobody will talk about it, simply because he is a powerful man.” “Dino is reported to have assaulted the wife by breaking a laptop on her head, attack her with a wooden plank, broken her nose,” continues Fejiro. “Melaye threatened her: You will die and nothing will come of it. I am untouchable.”

Indeed, the buffoon Melaye stops at nothing to display his insanity in the hollow chamber. To date, the most barbaric example of his deranged behavior is threatening to club Tinubu’s wife. Criminals and crooks have a clever way to stay out of jail in today’s Nigeria – they run for the Senate. Thanks to our moribund criminal justice system. Those who break the law have a special incentive to join who make the laws. Ninety-nine per cent of the Senators are thieves, crooks, thugs, illiterates, and mafiosi of all ages and all types are in the Senate.

Not surprisingly in a country where so many criminals aspire to be Senators, and so many politicians are suspected of being criminals, crime is their manifesto. We have many garden-variety thugs among 109 Senators. Melaye and his cousins Mesujamba Saraki and Ekweremadu rob Nigerians blind. Corruption and looting turn them into heroes. These nonentities are more like flat-out mafiosi, jetting around in aircrafts bought with our stolen money, doling out crumbs to those they impoverished. What future does Nigeria have in which the crooks and thieves become the dominant political bloc?

In reality, the kidnappers, the abductors, the armed robbers in our society are more virtuous than the Melayes, Mesujambas, Ekweremadus. The armed robbers, the kidnappers, and the thieves on our streets and highways, have far less to be ashamed of than the political whores, the forgers, the frauds, the swindlers, the looters in the senate because the street miscreants and high way robbers and the prostitutes trade only with what’s rightfully theirs, and only with those who want to trade with them. The Melayes, Mesujambas, and the Ekweremadus are far more despicable, and a bigger threat to humanity, than the most promiscuous lazy drug snorting crack heads. Because the crack heads are willing to let others be free, the Melayes, the Mesujambas, and the Ekweremadus are not.

These abominable trio think sitting in the desecrated chamber called Senate, makes them noble and righteous. Not at all. Even the Nazis’ had table manners and proper etiquette when they are not killing people. The difference between the Senate thieves and a common thief is that the common thief has the honesty to commit the crime himself while the ones in the Senate use their position as law makers to steal. The difference between them and the street thug is that the thug is open about the violence he commits, while the three musketeers forcibly control and elicit support, approval, and applause of their fraudulent and looting colleagues.

Dino Melaye, Bukola Abiku Mesujamba Saraki, and Ike Ekweremadu represent the most evil and destructive cult in our political history. These corrupt, lying, delusional megalomaniacs have infested all the fabrics of our society. They are traitors to our nation, to our people, and to our democracy. They are salesmen for Satan. Truth be told, these parasites who call themselves honorable senators, leaders, are not. They are not great men. They are not even average men. There is nothing honorable about them. They are evil. They deserve our scorn and contempt. These rogues in the highest law making house of our nation are the lowest of the low. They may dress better, have some vocabularies, highly visible, notorious, but they are not better than pickpockets, muggers, and carjackers. In fact, they are worst, because they don’t want to rob us of just our possessions, they want to rob us of our free will by slowly leeching away our ability to think, to judge, to act, reducing us to slaves in both body and mind. And still, we persist in calling them senators and leaders. Senators? Leaders??

Who would even for a moment think that these crooks that invade and invert our nation are the sort of people we should listen to or emulate or follow anywhere. Even people with the most dormant brains know full well that the Melayes, Mesujambas, Ekweremadus are all corrupt liars and thieves, opportunistic con-men, exploiters and shameless rogues. They are stupid, vicious animals. Their belief system is completely schizophrenic. The mere fact that the political crooks wrote something down and declare their threats to be law, does not mean that any human being in Nigeria has the slightest moral obligation to obey. We have the moral obligation to deflate these delusional bloated windbags. The only laws they make and which they’re proud of, are nothing more than the selfish whims of tyrants and thieves. The word crime once meant “an act harmful to another person.” Now it means to be a Senator of the parasitical criminal class. They are lawless terrorists and lawless terrorist criminals.

Opinion: Presidency Vs BBOG; A Relationship Gone Sour So Soon