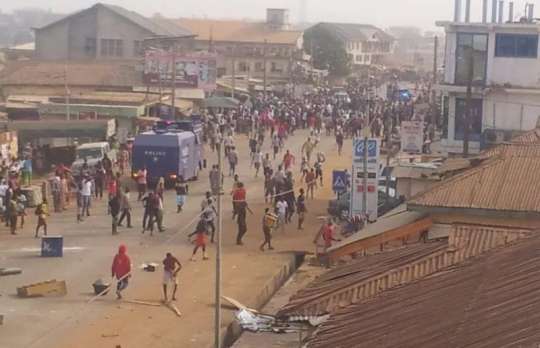 This is coming only days after Redeemed Christian Church of God member Eunice Olawale was slaughtered during her morning Evangelism in Abuja, yet another attack was carried out by some 200 Islamist fundamentalists who stormed a Catholic Church near the capital and destroyed items in the premises.

The Vicar-General of Parish, Revered-Father Gobep Luka Sylvester, who confirmed the news to THISDAY last night said about 200 Muslim youths stormed the Church premises yesterday and destroyed properties of the church.

Some Catholics had gone to the church to pray and were attacked by the Muslims who claimed that Friday was their day of prayer and that the Church only had right to worship on Sundays.”

In his chat with the paper, Revered Father Sylvester said he was not around the premises when the extremists ran amok, destroying the church properties, but that the security officials in the church were injured. He said:

“Sometime around 2pm, some Muslim youths numbering 200 left their Mosque after their Friday Jumat prayer and rushed to the Church premises, climbed the wall and destroyed everything in the Church: the windows, the alter, musical instruments, the chapel.

The security man in the church premises was beaten to pulp. Some women who were holding a prayer meeting were chased away. The seminarian who is resident in the premises was also beaten up and chased away.

Just last week, Mrs. Eunice Olawale, a mobile preacher of the Redeemed Christian Church of God was killed by some fanatical Muslims in Kubwa, FCT. How long are we going to continue like this?”

The clergyman also confirmed the police were alerted and they have launched investigations.