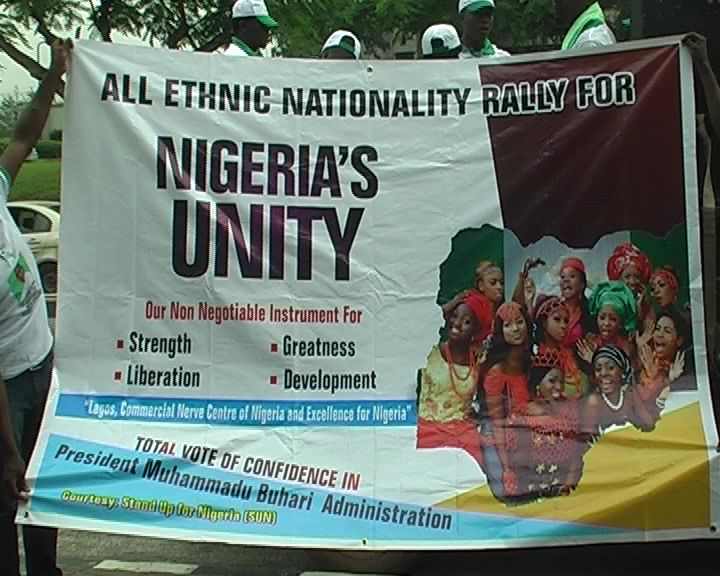 The South West Coordinating office of Stand Up for Nigeria (SUN), a socio-political group today 13th July held a peaceful protest March that took place across major parts of Lagos today reaffirming the Unity of Nigeria and the confidence of the Nigerian masses in President Muhammadu Buhari.

The protesters which were in thier thousands took the whole of the day to distribute pamphlets across IKeja, Opebi, Allen Avenue, Lagos State House of Assembly and the Lagos House where Gov Ambode resides as his official residence to enlighten Nigerians on the need for the country’s unity.

Speaking during the rally, South West Coordinator for SUN, Mr Abiona Desmond insisted that the unity and continued existence of Nigeria is not negotiable contrary to those that have been dismissing our oneness with their bogus claims of a negotiable unity.

The group also passed a vote of confidence on the President Buhari’s administration, saying his commitment to rid the country of corruption and ensure security of lives and properties are already yielding results.

He said, “This is why we are today holding this march to not just add our voice to the discourse but to demonstrate our preparedness to back our position with action when the need arises.

For us, the demand for restructuring is a coded way of calling for the disintegration of Nigeria, which is why we rightly concluded that it is not the way to go. We have seen several groups and eminent persons hyping restructuring as if it is a cure all for all the things are wrong with the country whereas the main issues are not being addressed.”

According to him, if the several ethnic nationals that make up Nigeria feel unfulfilled, it is because their leaders were corrupt, act with impunity and promote violence against their own ethnic stocks.

He said, “Fortunately, these are the shortcomings that President Muhammadu Buhari’s government has been tackling head on. We have seen how endemic corruption became under the previous regimes. It was this satanic level of corruption that sustained the era of impunity.

“The attempt to either cover up the corruption or justify corrupt expenses was the driver for the rise and spread of insurgency. No wonder the crisis entrepreneurs have found a new pastime in calling for restructuring.

“We are therefore urging Nigerians to look beyond the clamour for restructuring. We should, for a start, assess where we have been, where we are and where we want to be at any material time. This assessment is best done under a purposeful leadership which we are lucky to have under President Buhari who has strengthened our belief in the unity of this country in which our faith is unwavering.

“There is no better response from us as conscientious Nigerians that to pass a vote of confidence in President Buhari. The vote of confidence should translate into more citizen support that will spur him on to do even more. When this happens Mr President would be able to leave this country even more united than he met it.”

Desmond said the group decided to pass a vore of confidence on the President because of his performance in office in the last one year which has seen Nigeria regaining its deserved respect in the comity of nations.

According to him, the President is doing well and would do more if we reduce the distraction, team up with him and believe in the greatness of Nigeria despite its current challenges

He said this is a task that must not be taken lightly because Mr President would only have to focus to perform better if these separatists and their sponsors stop distracting the nation with their childish demands.

Oluremi Tinubu Called Me A Dog And A Thug, I Am No Coward, I Defended Myself Says Dino Melaye