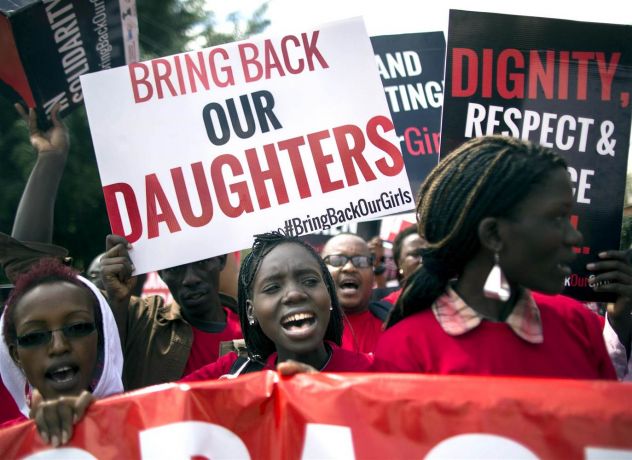 The Bring Back Our Girls movement has lamented the inability of the President Muhammadu Buhari administration to meet any of its demands, a year after its first parley with the president.

In a statement read Friday during a special sit-out in Abuja to evaluate its achievements one year after engaging with the president, BBOG said it is extremely disappointing that none of the five demands has been completed.

“On 8th July 2015, the #BringBackOurGirls movement, parents of our abducted #ChibokGirls and representatives of the Chibok community had an engagement with the new President, Muhammadu Buhari. This was necessitated by the need to establish fact, the urgency of our cause and dispel misconceptions about our movement, especially considering the treatment we had received from the preceding administration. At the time of that engagement, our 219 girls had been in captivity for 450 days and the President acknowledged government failure with regards to the rights of our girls and victims of the insurgency.

“As part of our submissions to the President, we presented Our crowd-sourced Citizens’ Solution to End Terrorism, Verification, Authentication and Reunification System (VARS), and a List of Demands”, the group said in the statement which w as jointly signed by Dr Oby Ezekwesili and Aisha Yesufu.

Its initial demands were the implementation of the Verification, Authentication and Reunification System VARS, Protocol of Engagement with the Citizens among others. “We proposed that a team be tasked with the credible implementation of VARS. The primary task of the team was to work with every abducted victim’s family and community to accurately ascertain the true identity of such individuals. Following their accurate identification, the comprehensive program for Recovery, Rehabilitation, Resettlement and Reintegration was to be made available to them. It was also supposed to entail the setting up of a Missing Persons’ Register.

“We requested that the President direct relevant Government representatives to work with the BBOG Family to commence work immediately on an Accountability Matrix, which will define the protocol for obtaining and sharing information with citizens. We also suggested a monthly meeting between security operatives and community stakeholders in communities most affected by these acts of violence e.g. Chibok, Gwoza and Bama. We believed at that time that it would encourage much needed collaboration and information sharing to bridge the identified communication gap.

“We requested that the President direct the establishment of a Commission charged with the task of transparently investigating and reporting on the security lapses that caused their successful abduction and the operational leadership failures that led to their long captivity in terrorist enclave. This Commission was also to review the allegations of corruption within our security services that has hindered its capacity to perform effectively

“We suggested that the Government begin, in earnest, a holistic process of proper sensitization and enlightenment to curb this trend of youth radicalization and extremism. The BBOG Family indicated willingness to work with the Government to design the programme. We departed with the hope of re-engaging the administration towards setting clear timelines and deliverables for the five requests.

“A year later, it is extremely disappointing that none of the five demands has been completed. Specifically, a failure to implement VARS means we still do not have a cohesive system of identifying liberated citizens or even a database of those affected. Thanks to an initial partnership between the #BringBackOurGirls movement and the National Human Rights Commission (NHRC), a coalition of Government Agencies led by the NHRC has begun the initial processes towards the establishment of a National Missing Persons’ Register. We acknowledge this, but ask that the work is fast-tracked and completed for the benefit of displaced Nigerians.

“This morning, a year after our engagement and close to six months since the President directed the setting up of a committee to carry out investigation into the abduction of our girls, we read of an approval of the members of the committee. Again the lack of urgency in the dispatch of responsibilities towards the rescue of our girls is alarming.

“At this rate, it begs the questions – when will the committee be constituted? When will they be mobilized to start work? What time line will they work with and the reports submitted? Under what timeline will the government study and act on the report? What does this mean for our Chibok Girls who do not have the luxury of time and whose plight worsens with every passing hour, minute and second?

“The non-release of the Report of the Presidential Fact Finding Committee of the Chibok Girls and the Presidential Committee on Security Challenges in the North East is also unacceptable. We demand an immediate release of these reports as their importance for lessons learned about the abductions and insurgency in general cannot be overemphasized. We reiterate our position that sensitive areas with implications for national security as repeatedly mentioned can be blotted out of the public document. Global best practice supports this. These lessons learned while providing information to the public will justify the need for expenditure of public resources, provide metrics for scrutiny and acceptance of the new report and factual evidence for the prosecution of all benefactors of the diversion of funds for arms procurement”, BBOG noted.