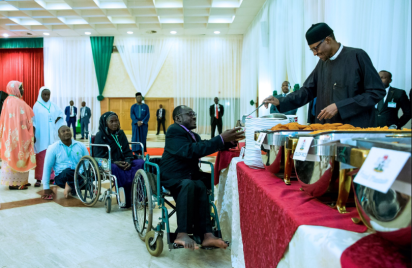 Following insinuations of artificial hindrances made to slow down the anti-corruption war of the present government, President Muhammadu Buhari has warned that masterminds of such acts would meet their waterloo soon.

The President stated that he was undaunted in the fight against social vices in the country, saying that no degree of campaign of hate would deter him.

He stated that the level of rot perpetrated especially by the immediate past government was alarming and has to be cleansed.

He however assured that the Federal Government was deploying a lot of resources to improve a number of critical infrastructure, including power, road and medical facilities.

“We are committed to tackling corruption in this country, but whoever tries to deter us from fighting corruption will suffer the consequences,”he said.

Buhari also expressed optimism for massive food production in the country, especially in rice and wheat given the volume of rainfall this year.

“This year I think we are indeed lucky. I met most of the Northern Emirs recently and I asked them about the rainfall in their domain, some of them were even complaining that the rains were getting too much.

“That to me was an indication that we are going to have a bumper harvest towards the end of this year.

“I believe with this commitment we should not only feed ourselves in terms of rice and wheat and other food crops but we will be able to export to other countries and maybe attract foreign exchange too,”he said.

Highlight of the event was the serving of food to a physically challenged person by president Buhari.

Muslims Are More Marginalized In Nigeria – Says Sultan of Sokoto