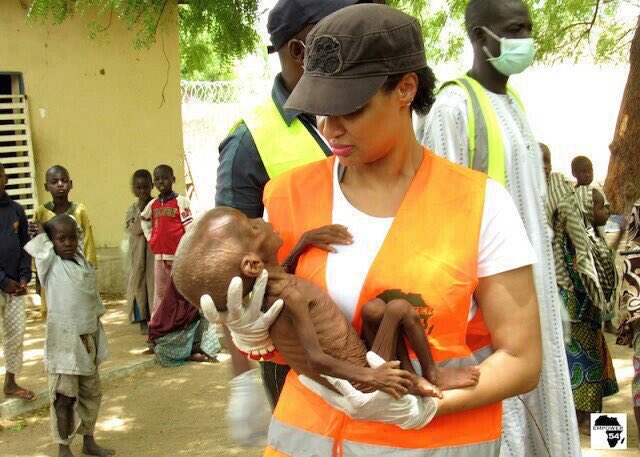 The Internally Displaced Persons (IDPs) in the Federal Capital Territory (FCT) have appealed to spirited individuals and organisations planning to contribute towards their well-being to deal directly with them rather than going through questionable Non-Governmental Organisations (NGOs) that may not have their best interest at heart.

This is coming barely a week following revelation of starvation and hunger in various IDP Camps despite billions of naira worth of gifts and cash donated for their upkeep.

The IDPs made this request yesterday, when the Nigerian Institute of Management (NIM), as part of the activities put in place to provide succour to the poor and ensure the well-being of the displaced persons, gives food items worth thousands to the New Kuchingoro Camp in Abuja.

According to the Chairman of the IDPs, Mr. Philemon Emmanuel, they have being surviving since their relocation from the North Eastern states following the activities of the Boko Haram Terrorists in 2014 to the camp, on the goodwill of some genuine NGOs, spirited individuals, and faith-base organisations amongst others.

“We have been here since 2014, we are 1467 persons from Borno state Kozar local government area and 56 from Adamawa. And we have been surviving because of the help of some churches, organisation, mosques and private individuals.

“We hear many times that people have donated items to assist IDPs in Abuja but don’t get to see the donations. Recently, we heard that Dangote donated items worth millions of Naira to IDPs in Abuja but we are yet to receive the items. We however want to appeal that if some people want to help they should come through the IDPs camp so we can get the assistance directly,”Emmanuel remarked.

Earlier, the Chairman, NIM Planning Committee for the IDPs, Mr. Sanio Ala-Obarie, said that the donations is part of their duty to ensure that the displaced persons are in good health.

Ala-Obarie said that the visit was to identify with the IDPs and contribute a token to help in alleviating their deplorable condition.

He said “basically, we are just here to contribute as a pro institute. We are aware of the deplorable condition as result of the Boko Haram insurgent in their state”.