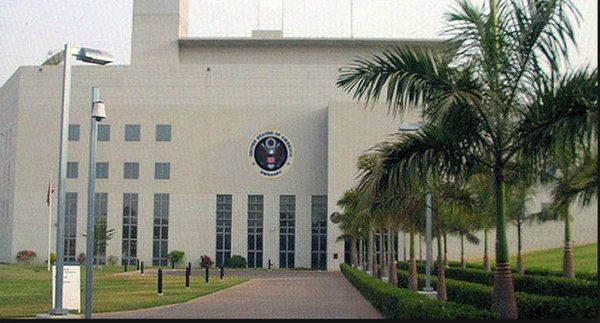 The three Nigerian lawmakers, who were accused of sexual misconduct, while on a trip to the United State of America, will no longer have access to the North American country henceforth.

Nigerian Lawmakers On A US Vistor Leadership Program Accused By US Embassy For Attempted Rape While In America….

As a result of the ‘severity’ in the accusation levelled against them by the US Ambassador to Nigeria, Mr James Entwistle, their visas have now been revoked by the country’s Embassy.

They were among 10 lawmakers invited by the US government for the programme held between April 7 and 13, 2016 in Cleveland, Ohio.

The 3 members of the lower chambers were accused of attempted rape and soliciting for sex from prostitutes while on a trip to the United States.

One of the accused lawmakers, Gbillah, confirmed that they had received correspondence from the US Embassy on Wednesday, June 15, 2016 in which it was stated that their US visas had been denied and also requesting that they bring their international passports with current US visas to the Embassy.

Reacting to the development, Gbillah threatened to immediately institute legal actions against the US Government, the Ambassador and the Marriot Hotel Brand, among others for damages.

Gbillah’s letter, which was dated June 16, read, “In your letter, you claimed that I was identified as one of the members of the aforementioned group who asked for the assistance of a hotel parking attendant to solicit for prostitutes at the Residence Inn Downtown Cleveland Ohio.

I am extremely shocked, upset, irked and embarrassed by your letter and want to categorically state that these allegations are completely false, unfounded, malicious and a calculated attempt to malign and cast aspersion on my reputation and character as a Nigerian citizen and honourable member of the House of Representatives and to bring disrepute to the hallowed institution of the National Assembly and the entire nation of Nigeria.”

“I have visited the US and several countries in the world countless times over the last several years and have stayed at countless hotels all over the world and want to dare the US government to find any instance where I have previously solicited for prostitutes from a hotel employee even when I was not a married man. “…I am a member of two of the rewards programmes of the parent hotel brand of the Residence Inn (Marriott Rewards and Ritz Carlton Rewards) and the record of my previous stays at all the hotel brands can be obtained to ascertain whether or not I have ever solicited for prostitutes from any hotel employee.

“Although it is very easy to obtain the previous travel history and track record of accused members, it is obvious the US State Department and the US Embassy have presumed our guilt without proper investigation because of the disdain and disrespect they have towards the average Nigerian citizen, even when such citizens are members of the Nigerian House of Representatives, a treatment they will never mete out to an ordinary American citizen who is not even a member of the US Congress.

“A member of our group made a formal complaint to the organisers of the programme about his being defrauded to the tune of about $100 at the Renaissance Hotel Dupont Circle Washington DC, but neither the US State Department nor the US Embassy in Nigeria has deemed it fit to take any action or initiate any investigation in this regard.”

“I will institute legal action in Nigeria against the US Embassy in Nigeria requesting for damages, comprehensive investigation of these allegations and a formal globally publicised apology. “I demand that the US Embassy and the US State Department (regardless of your revocation of my US visa) allow me to travel to Cleveland even at my own expense to confront my accuser and confirm my innocence. I otherwise have no desire to travel to a country that appears to pay only lip service to the ideals they claim to uphold.

“Also, I demand for the full video/CCTV footage covering the period of our entire stay at the hotel; this should clearly show the movements and activities of every member of the group throughout the hotel.”

Also, Gololo, who was alleged to have grabbed a housekeeper, in his letter to the ambassador, which was copied to the speaker, warned the US Ambassador of the consequences of his petition.

He said: “There is the example of Mr. Strauss, the former Managing Director of the IMF, who was involved in similar allegations, but the evidence was clearly brought showing what he did in the hotel room. So, I demand video or any similar evidence of my alleged misbehaviour.”

Similarly, Ikon claimed that the allegation levelled against him was not only untrue but also a case of mistaken identity.

He stated, “My attention has been drawn to the publication, alleging an act of impropriety against me by the US Mission in Nigeria.

“I wish to state unequivocally that this is false and definitely not me.

“This, to me, is a case of mistaken identity and I have already instituted measures both legally and diplomatically to clear my name and the institution I represent.

“We do not comment on private diplomatic correspondence. Thank you very much for your inquiry,” the Mission’s Press Attaché, Sean McIntosh, said in an email.”

The Speaker of the House of Representatives, Yakubu Dogara has ordered an immediate investigation into the case.

Barely A Year In Office, EFCC Probes Ortom Over N4.29bn