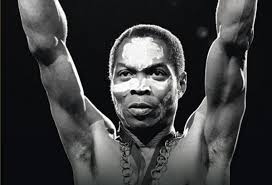 Still half way deeply in my sleep, with my inner chums still digging it with their little limbs that couldn’t leave a huge mark on the surface of the earth, as the euphonious blaring tunes from his trumpet soared in the entire atmosphere of my room. The talking drums kept conversing with one another like old wise men, while the enthralled and scrumptious tempo from the other musical instrument that were played by his band members grew ceaselessly. Tony Allen stood on his right, doing what he knows best. The feelings that accompanied this whole shindig made me realised that I was total in a different world, if not the envisaged paradise or heaven.

The saying that an old woman never gets old and tired, whenever a song that she is familiar with crosses her path was the next thought that crept into my mind like a snail. ‘Wow! I bellowed.’ I’m not old either, but the reality of this old adage manifested incessantly on me, as the melody from his ITT (International Thief Thief) track blustered away my sanity. ‘What an outlandish feeling?’ I bawled silently and smiled while still asleep.

Whirling round and round on the bed, as the collection of my Afrobeat VCD jumped from one track to the other inside the DVD machine, I was very much happier in my unconscious state. The thought of every ill practices around me ceased to exist at that moment, and I could relate with the strong link that thus existed between my inner presence and the songs. This powerful bond was orchestrated by the words, rhymes and rhythms that hopped from my two miniature speakers. My strength and emotions continued to grow stronger and stronger, and somehow, I felt as if I had discovered the hidden secret of the old Black Power Movement. Next came his voice echoing;

His commanding voice continued spitting fire as the ITT track rolled from one verse to the other. All the ladies that stood in front of their long micro phone, with pieces of clothes that girdled round on their chest and waist sang and hum the chorus of the song directly into their respective micro phone, while twerking their buttocks left and right. Uneasily, my left eyelid flicked open, as the leading voice of the band kept reaffirming the authenticity of his statement, and calling on the various gods to kill him if he had lied against the Nigeria Government and their evil leaders in any way.

Repossessing my consciousness little by little, tears oozed from my eyes as I was still on the bed cuddling my pillow. I couldn’t believe that I had slept for five hours, and the gospel from Fela Kuti’s messages (songs) guided me all through on the other side. His preaching on human right, corruption, the rule of law and its abuse by the Nigeria Government and the politicians was raw. Everything he said or predicted in the past is happening in Nigeria today. Hastily, I made a little flash back on Achebe’s novel ‘There was a country’ and I shook my head up and down, like an Agama lizard and wept for this failed state of ours.

Born Olufela Olusegun Oludotun Ransome Kuti on 15th October 1939 in Abeokuta, Ogun State Nigeria, by Reverend Israel Oludotun Ransome Kuti and Funmilayo Ransome Kuti, the arrival of Fela the Baptist, the forerunner of Nigeria was registered in the world. The young Fela who was sent into the country to reveal all the cruel and corrupt activities of the Nigeria politicians, and as well to call their attention to the doom that will soon befall the entire country if they fail to heed to his honest revelations.

Having decided to go out of his parents wish for him to study medicine in London, Fela whose call was clear to his soul decided to study music in Trinity College Of Music. He trod on his destiny majestically and patiently, until his consciousness was introduced to the Black Power Movement by his guardian angels. At this point, his purpose and destiny in life were placed right in his palms.

Through his music, his trumpet coughed out so many prophecies about Nigeria, and his unrivaled energetic vocal that invoked respect whenever he mounted any stage was flawless. He lambasted the corrupt military regime that had enslaved the minds of most Nigerians. Ethnicity and religious conspiracy were the two brothers in the hood, which the past military regime and the sick Democracy that we practice today usually employ, in order to disintegrate the assumed United Picture that our colonial masters took and called it a nation. Early enough, he discovered that this amalgamation that had corrupt leaders who careless about the lives of poor and suffering Nigerians wouldn’t in any way usher in the paradise he had envisaged, so he decided to create his own sovereign republic that he called ‘The Kalakuta Republic,’ just to dissociate himself from this ‘Beast of a Nation’ called Nigeria.

On several occasions, he was beaten and locked up in the dungeon called prison by the Nigeria Government, simply because he frowned at their dubious characters. He spoke the truth and challenged their tyrannical method of leadership. Despite all the threats he got from them, he snubbed all and sundry and continued fighting for the just course he believed in – he vowed never to compromise his fate.

So many Nigerians believed so much in his honest struggle for humanity and for the black race in totality. Transforming Nigeria into a peaceful abode, where absolute peace and tranquility would prevail was his driving force. Though, he had no titles like ‘Pastor, Evangelist or Imam attached to his name. Maybe this was why the Nigeria Government and some Nigerians who couldn’t view through his personal spectacle lacked the vision that he had and never believed in his struggle.

He was born with multiple golden spoons, no doubt about that, but he believed that things should be done the right way. He always volunteered to speak for the poor or voiceless through his music, damning any consequence that would befall him. He had challenged the Nigeria Government and politicians, to the extent of calling them names like; ITT (International Thief Thief, Zombie etc.). The military regime felt his existence to a greater extent, nonetheless, the reversal response he got from them most times were disastrous and life threatening.

Sooner than I least expected while still on the bed, Fela’s ‘Beast of a nation’ track unobtrusively began. I jaggedly got hold of the remote control that had laid beside me like a prostitute from Koramo beach all through the night, and tuned the volume of the DVD a bit louder. Gradually, the beat of the song ushered in Fela’s vigorous voice, and he bawled;

‘Ah- Let’s get now into another

His voice came reverberated again and again. Immediately, the second sermon session began. His resonated voice had already instructed that I should substitute ‘Hallelujah’ for ‘Aiya-kata,’ so I whispered politely to myself ‘A-i-y-a-k-a-t-a,’ as the tempo of the song amplified. As the sermon continued, it became very much obvious to me that Nigeria Government and his cohorts are evil, having allowed men without conscience and principle to dominate her homes and balconies. I kept wondering what kind of evil have possessed their lives and consciousness.

All of a sudden, I began to count the amount of natural resources and human resources that the designer of this nation had kept in her custody one by one, like a Christian song that said we should count our blessings one by one. It’s so doleful to know that those we asked to manage and take care of these resources have converted each bit of it to their personal use. More so, the returns (money) from these resources have been looted and stolen by these politicians. Mediocrity, abuse of human right, killing of innocent citizens by those that were paid to protect them, ethnic wars that had been birthed by wrong mindset and brainwashing, looting of public funds, just to mention but a few are the trending life style of most Nigeria politicians.

Nigeria Government succeeded in destroying Kalakuta, a Republic where life was sweet, long, fun, and secured. A Republic where freedom of speech, equality, respect for human life and human right were held to a high esteem.

In-between Fela’s sermon, a voice came through my window yelling aloud ‘Down NEPA! Down NEPA!’ The power died away and the song halted.

Today, Kalakuta is gone, Fela Kuti is a history, but his prophecies and struggle will continue to haunt Nigeria Government, until patriotism, accountability, respect for human life and human right becomes a tradition.