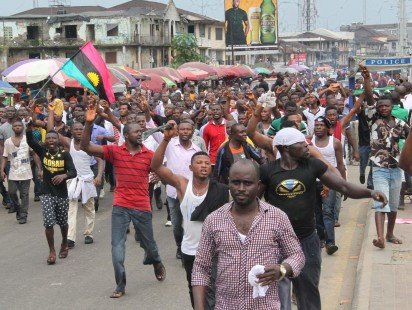 A week after the slaying of pro-Biafra demonstrators in Onitsha, details of how the mass killing was coordinated by security forces has emerged.
PREMIUM TIMES has obtained an insider account by a whistleblower, who is an operative of the State Security Service.

The same whistleblower had reached out and provided vital information to two human rights organization, the Amnesty International and the Intersociety for Civil Liberties & Rule of Law.

The operative, who was part of the security joint operation but is now disturbed by the manner soldiers “refused to play by the rule”, contacted a trusted human rights activist.

The identity of the whistleblower is being concealed so he is not punished by the authorities. His recorded narrative is however in the possession of this newspaper.
The whistleblower stated that the operation started with medium use of force on the night of May 29.

The following morning, the joint task force moved from the Onitsha Army Barracks to the rally venue on Nkpor-Umuoji Road only to find a crowd of pro-Biafra supporters who had been battered the night before by invading soldiers in the premises of St Edmunds Catholic Primary School.

The crowd, joined by newcomers, was by now in a resistance mood.

At that point the JTF retreated to Onitsha Military Barracks. The retreat infuriated Cantonment Commander, Issah M. Abdullahi, a colonel, who ordered them back to clear the venue and roads of all “miscreants.”

With this firm directive, the JTF, dominated by soldiers and led by Major C.O. Ibrahim of the Nigerian Military Police, stormed the streets and the event venue.

The rest is history. The whistleblower said that while other members of the JTF were minimizing the use of force, soldiers recklessly opened fire at crowds, shooting at close range, and “wasting people indiscriminately.”

Passersby and people in their homes and shops were not spared of stray bullets, the SSS operative said.

He said it got to a point where injured pro-Biafra supporters, seeing the countless bodies of their colleagues on the ground, opened their arms wide, advanced towards the soldiers screaming that they too should be killed.

Three military trucks were used to cart away heaps of dead bodies.

According to the whistleblower, there are two cemeteries inside the Onitsha Army Barracks. Though reserved for fallen soldiers, victims of the massacre were buried in the cemetery close to Yahweh Church, inside the barracks.

The whistleblower added that in the evening of the same day when everyone thought the dust had settled, JTF operatives invaded the Nnewi Teaching Hospital and to the fury of nurses, abducted 12 gunshot victims and seven of their relations looking after them.

The 19, including women, were brought before the Commissioner of Police, Hosea Karma. He claimed that the commissioner accused the 19 of threatening the security of the state.

He would however order that the wounded men be returned to the hospital while their family members be taken away by SARS for interrogation. Human rights activists familiar with police tactics in Nigeria say that interrogation by SARS is a euphemism for torture.

Continuing his narrative, the whistleblower said that on June 2, two days after the massacre, soldiers stormed the Nnewi hospital and arrested eight of the 12 critical injured men the commissioner had earlier sent back to hospital.