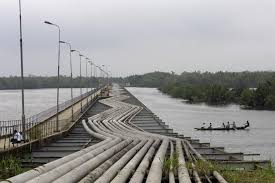 The spirited efforts of the Nigerian Navy (NN) to checkmate the activities of illegal crude oil thieves, pipeline vandals and other criminals operating in the Niger Delta has continued to yield positive results. The Service more than before stepped up its operations against all forms of threats in the maritime environment with more combat platforms injected into the security of critical economic assets and safer water ways.

In view of the above, 3 persons have been arrested by the operatives of the Nigerian Navy in connection with series of maritime crimes. The suspects are Sani a.k.a Dogonyaro, Usman a.k.a smally and Adamu Mani. The suspects are still undergoing investigation and will be handed over to the prosecuting authorities for further action. The arrest of these suspects has proven helpful in the fight against the criminals.

Similarly, operatives of Forward Operation Base (FOB) Badagry have arrested 5 citizens of Benin Republic in connection with economic crimes. The suspects are Mr Philmen Agboku, Mr Penu Daniel, Mr Sule Soka, Mr Dosu Victor and Mr Sodope Olivie. They were arrested on 26 May 2016 along Tongeji-Port Novo axis at about 0500hrs in a wooden cotonou boat conveying about 900 jerricans. The jerricans contained product suspected to be stolen Premium Motor Spirit (PMS). However, the suspects are being interrogated in order to get indepth view of the gang and its sponsors.