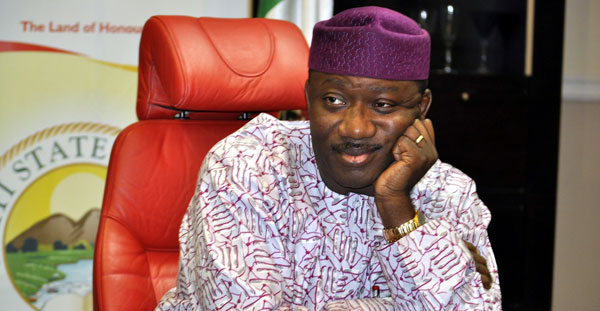 A group, Vanguard for Credible Representation, has petitioned the Independent Corrupt Practices and Other Related Offences Commission, ICPC, over alleged misappropriation of N852, 936,713.92 counterpart fund belonging to the Ekiti State under the Dr. Kayode Fayemi administration.

Fayemi is the currently the Minister of Solid Minerals and the group allege that the counterpart fund was meant for the Universal Basic Education Board, SUBEB, in the state.

In a petition dated March 3, 2016, signed by its Chairman, Comrade Akinloye Oyeniyi, and made available to journalists by Lere Olayinka, the spokesman to Governor Ayodele Fayose of Ekiti state, the group alleged that as governor of Ekiti State, Fayemi, in contravention of Section 11(2) of the Universal Basic Education (UBE) Act, 2004 authorised the illegal withdrawal of the a sum of N852, 936,713.92 from SUBEB Access Bank Account Number 0065385694 on October 8, 2014, eight days to the end of his tenure.

The amount, the petitioners alleged, was counterpart fund paid by the Ekiti state government to access the Universal Basic Education Commission, UBEC, 2012 Marching Grant of N852, 936,793.12.

Responding to the petition, ICPC in a letter dated March 21, 2016 and signed on behalf of the Chairman by one M. M. Abdulai, said the petitioner will be notified of further development and that Reference Number ICPC/P/NC/363/2016 should be quoted in further correspondence with the Commission.

The petition read: “it should be noted that UBEC Deputy Executive Secretary, Dr. Yakubu Gambo told the Senate Committee on Finance’s Budget Defence that Dr Fayemi, used the N852.9 million counterpart funds dedicated for education by the Federal Government through the UBEC for other purposes.

“Mr Dapo Kolawole, who was Fayemi’s Commissioner for Finance, while defending the allegation, said there was no law forbidding States from borrowing counterpart funds to support states capital development operations.

“Consequent upon this illegal withdrawal, UBEC caused a letter to be written to the Ekiti SUBEB in which the commission called for the return of the N852, 936,713.92 to the account of SUBEB.

“UBEC, in the letter dated April 16, 2015, with Reference Number: UBEC/FA/SUBEB/EK/183/Vol.II/162 described the withdrawal as criminal act that violated Section 11(2) of UBE Act 2004 and conveyed its suspension of Ekiti State from accessing any further FGN-UBE Intervention Fund.

“UBEC letters dated April 16, 2015 and April 29, 2015 as well extract from Ekiti SUBEB Statement of Account are herewith attached.
“In view of the anti-corruption stance of the President Muhammadu Buhari’s government, we hereby demand that the EFCC should investigate this clear case of misappropriation of public fund; with a view to bringing those found culpable are brought to justice.

“We must let you know that most Nigerians who are already of the opinion that your commission is only after those opposed to the Federal Government are interested in your response to this complaint.

“We however trust that you will use your good offices to direct an immediate and thorough investigation into these complaints with a view to bringing whoever that is found culpable to justice.”