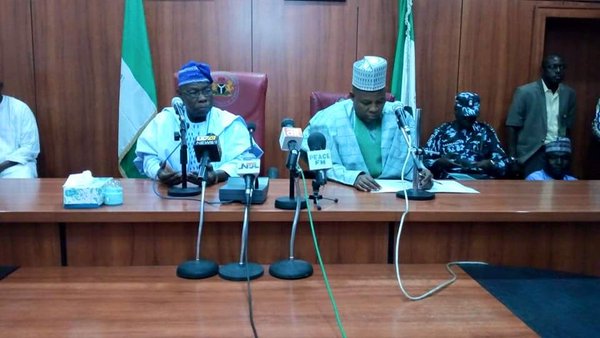 Borno State Governor, Kashim Shettima, on Monday, has said he was convinced that Obasanjo would have rescued the missing Chibok girls if he were the president at the time the insurgents seized the 279 girls from their hostels.

Shettima who poured encomiums on former President Obasanjo said that he was sure he would have handled the situation better than President Jonathan who was in charge when the girls were kidnapped.

Shettima made the claim on Monday when former President Olusegun Obasanjo, who is on a two-day visit to the University of Maiduguri, visited him at Government House in Maiduguri, the Borno State capital.

While playing host to Obasanjo, Shettila recalled how Obasanjo fought gallantly for peace during his tenure, vigorously interacting with stakeholders including governors, traditional rulers and other peacemakers in troubled regions in search of peace.

The governor said: “In our own case, Your Excellency, after the Chibok abduction of over 200 schoolgirls in April, 2014, it took 19 days for me to receive a call from the Presidency,” Mr. Shettima said.

“I brought this mainly to show the difference, because we will only appreciate scenarios when we make comparisons.”

The governor also recalled a statement credited to the current Agriculture Minister Audu Ogbe who once served him as an adviser, who, he said made glowing remarks about Obasanjo long after they had changed their political parties.

He said, “Your Excellency, Sir, I was privileged to have worked closely with Chief Innocent Audu Ogbeh as Honourary Adviser to me on Agriculture. He selflessly assisted us in fine-tuning our Agricultural programs from 2012 to 2015 which made him to frequent Maiduguri at the heat of the Boko Haram insurgency. I remember that in one of his visits, we had one conversation in 2014 after the Chibok schoolgirls abduction. I was actually lamenting to him on governance at the Federal level with relations to poor handling of the Boko Haram insurgency.

“As I was lamenting to him, Chief Ogbeh said something to me and I quote; “Look, I might have had some political difference with President Olusegun Obasanjo but to say it as it is, if Obasanjo had been President while this insurgency is happening in Borno and other parts of the northeast, you would have witnessed what responsive Leadership entails”.

“Chief Audu Ogbeh went further to say that from his point of view, His Excellency, Chief Olusegun Obasanjo was one of Nigeria’s most hard working President. He described President Obasanjo as a highly energized workaholic. Chief Ogbeh made these remarks as a leader in the defunct Action Congress of Nigeria at a time Baba Obasanjo was a PDP leader.

“Besides Ogbeh, I had a conversation with a former Governor who told me that while he was a sitting Governor during Baba Obasanjo’s regime as President, there was a time Baba called him countless number of times in one day to get update over a crisis that erupted in the Governor’s State.
“Someone even told me that as President, Baba Obasanjo had phone numbers of traditional rulers and resident heads of security establishments in States that were prone to crisis and he sometimes spoke with them directly to get first hand information.

“Without crisis, he created time to call traditional rulers to make enquiries about communal stability, ethno-religious coexistence and community policing in order to forestall problems. In our own case, Your Excellency, after the Chibok abduction of over 200 schoolgirls in April, 2014, it took 19 days for me to receive a call from the Presidency. I brought this mainly to show the difference, because we will only appreciate scenarios when we make comparisons.”

Mr Obasanjo, who arrived Maiduguri at about 11am, immediately visited Mr. Shettima, at the Government House. Mr. Shettima could not hide his excitement, describing himself lucky and privileged to receive Mr. Obasanjo in his office as a sitting governor.

“Your Excellency, Sir, majority of Nigerians salute you; we adore and respect you and we shall forever be grateful to you for standing for the unity, continued existence and the recovery of Nigeria when Nigerians needed you most,” he added.

Mr. Obasanjo, who commended the Borno State governor, called on the Federal government to embark on detailed research to document the Boko Haram insurgency for posterity to learn from.

The governor said Monday’s visit was the former president’s first call at the Borno Government House since 1976.

Egypt Air Plane Flying From Alexandria To Cairo Is Hijacked