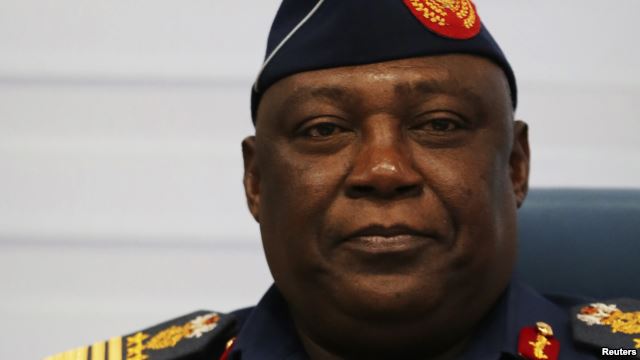 Yushau, former director, finance/account (DFA), Nigerian Airforce between October 2010 and December 2013 told the court how Badeh allegedly took money to the tune of N3billion from the coffers of the Nigerian Air force to acquire properties in different parts of Abuja and Yola for himself and his family.

Led in evidence by the counsel to EFCC, Rotimi Jacobs, SAN, Yushau told the court that the accounts of the Nigerian Air force is being maintained under 3 main vote heads: Capital, Overhead and Personnel Emoluments.
The PW1 stated how personnel emoluments were released and when asked what the balance is used for, he told the court that a balance of over N1billion is usually left depending on the programmes executed within the month.

According to him, of the N1billion, the sum of N558,200,000 (five hundred and fifty eight million, two hundred thousand naira) is usually the amount earmarked for general administration for the office of the Chief of Air Staff.

Yushau told the court that the said amount is usually under the control of Chief of Air Staff . He added that, “the amount in most cases was usually converted into US dollars by the Finance Officer at Nigerian Air Force Headquarters, Abuja. Thereafter, it is brought to the Director of Finance who in turn takes it to the Air House which is the Official residence of Chief of Air Staff at the Niger Barracks.”

According to him, “no acknowledgement is given for such amounts, but he usually tells the Finance officer to meet him at the residence of the Chief of Air Staff so that he can see when it is being handed over.”

When asked about a property situated at No. 6 Ogun River Street, Off Danube Street, Maitama, Abuja, Yushau told the court that, sometime in 2013, Badeh requested him to get someone to buy him a good house in Maitama where he could retire to.

The witness stated that he subsequently contacted a lawyer, named Usaini Umar who said he had three properties for inspection. Eventually, he expressed preference for the property at Ogun Street valued at N1.1billion.

He added that, Badeh directed that payment should be made for the house in dollar.

He also told the court that Badeh directed that the document of the property be prepared in the name of the second defendant, Iyalikam Nigeria Limited.

Yushau who dwelt extensively on a number of properties linked to Badeh stated that the former Chief of Air Staff abused his office by converting to personal use monies removed from the accounts of the Nigerian Air Force.

The matter has been adjourned to March 23, 2016 for continuation of trial.

Justice Abang had earlier refused the application of Badeh’s counsel, Samuel O. Zibiri, SAN, challenging the jurisdiction of the court and validity of the charge saying that the application would be heard at the end of the proceeding.

It would be recalled that Badeh among other things allegedly between January and December, 2013, used dollar equivalent of the sum of N1.4billion (One Billion, One Hundred Million Naira) removed from the accounts of the Nigerian Air Force to purchase a mansion situated at No. 6, Ogun River Street, Off Danube Street, Maitama, Abuja.

Witness Say Badeh’s Son Rejected A N340m House, “So We Bought Him Another One For N330m”