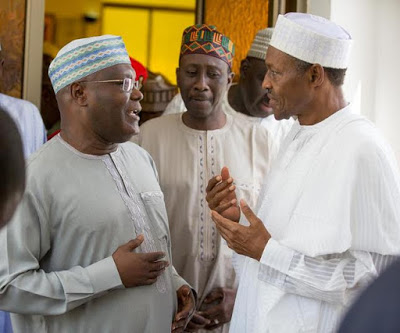 Sahara Reporters is reporting a list it obtained  of at least 91 people tied to influential or highly placed Nigerians who were recently offered juicy appointments by the Central Bank of Nigeria (CBN) in a hiring process that was highly secretive.

From President Muhammadu Buhar’s relatives to Ex-Vice President Atiku Abubakar and Buhari’s Cabinet ministers, all got their daufhters sons employed wrongly into the Nigerian Apex Bank…

The list of beneficiaries of the CBN’s job largesse include a daughter of former Vice President Abubakar Atiku, a son of Mamman Daura, a nephew of President Muhammadu Buhari and one of the closest members of the president’s inner circle, a son of the Minister of State for Petroleum Resources, Emmanuel Ibe Kachikwu, a daughter of former Speaker of the House of Representatives, Ghali Na’aba, also daughter of of the Inspector General of Police, Solomon Arase, a since of the Minister of Internal Affairs, Abdurahman Danbazzau and at least 86 others.

The highly controversial recruitment, seen as peddling of influence, first came to light a few weeks ago, but SaharaReporters just exclusively obtained the names of the beneficiaries.

The leaking of the irregular hires by the CBN caused significant embarrassment for the government and the bank. The CBN’s Director of Human Resources, Chizoba Mojekwu, was reportedly redeployed as the bank’s Director of Capacity Development and IT after CBN Governor, Godwin Emefiele, accused her of being behind the leaking of the list.

However, a top official of the CBN told our correspondent that Mr. Emefiele had arranged the hiring of relatives of top party leaders and powerful government officials as a strategy for saving his job.

Even though the list obtained by SaharaReporters has 91 names, our sources at the CBN disclosed that the CBN Governor had started the practice of using job offers to woo top government officials since Mr. Buhari came into power on May 29, 2015. One source revealed that, in September 2015, Mr. Emefiele had hired Claire Arase, a daughter of Nigeria’s Inspector General of Police, Solomon Arase.

SaharaReporters learnt that the CBN often went to great lengths, including tweaking the names of recruits, in order to hide the identities of beneficiaries of politically motivated recruitment. Often the CBN used the beneficiaries’ first names and their father’s middle names to hide their real identities. For instance, the bank listed Maryam Atiku as “Maryam Abubakar.” In another case, the bank entered the name of the son of Nigeria’s Minister of Interior, Abdulrahman Dambazau, as “Nagode Abdulrahman.” In other instances, the bank used the maiden names of hired persons instead of their married names.

The recruitments are deemed irregular because the CBN failed to advertise the vacancies in order to allow opportunities to all qualified Nigerians to apply for the jobs. In addition, the bank’s “political” recruitments did not follow principles of federal character set out for employment by government agencies and other public institutions. “Jobs were just handed to the children of ministers in the current administration,” one bank official stated. The source added that many of the new hires were asked to pick their department of choice after their irregular employment was concluded.

Below is the full list of 91 people illegally hired by the CBN: