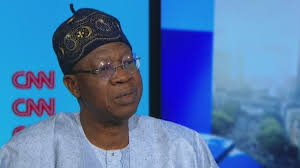 THISDAY Newspaper is reporting that the Minister of Information and Culture, Alhaji Lai Mohammed, on Saturday lamented that the economic situation in the country has gone completely out of the control of government as the global economic meltdown is having a negative spiral effect on it.

He explained that this was so because Nigeria cannot determine the price of crude or gas.

Berating critics of the administration as mischief makers, he said President Muhamadu Buhari’s frequent trips abroad, especially to the oil-producing nations, became imperative because of the urgent need to rally support for the stability of the global oil prices and also to attract Foreign Direct Investment FDI into the country.

While noting that stabilizing the prices of crude oil will help prop up the country’s currency, he stated that the president has been spending countless times outside the country to find solution to the crash in oil prices.

The is why the president cannot stay here, he said. According to him, staying here in Nigeria is like an army general who in the face of war remains in the bunker.

Mohammed, who made these statements while fielding questions from a radio station at the weekend in Abuja, said the fact that the present administration led by Buhari is still managing to drive the economy is a credit on its side.

Breaking: Lagos-bound Plane Makes An Emergency Return After Take Off