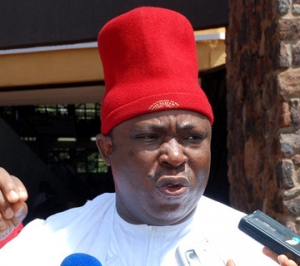 Former National Chairman of the All Progressives Grand Alliance (APGA) and the party’s candidate for the court-ordered re-run election ror the Anambra Central senatorial zone, Chief Victor Umeh, was on Thursday arrested by operatives of the Department of State Security (DSS) at his Enugu residence.

Though details of the arrest were still sketchy as at the time of filing this report, he was reportedly arrested and taken to Abuja by road.

He said that officials of the DSS arrested Umeh at his residence following a “petition by political leaders from Anambra state allegedly led by former governor 8f the state, Dr. Peter Obi that he is sponsoring the activities of the IPOB, MASSOB”.

He said that contrary to reports that Umeh was not handcuffed and was not flown to Abuja. “They travelled by road and as I speak with you.