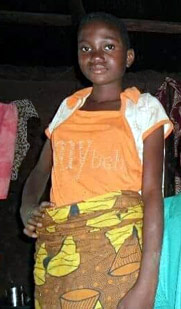 Relations of another missing 14-year-old girl, Patience Paul, have alleged that the primary six pupil of Mohammed Zako Model Primary School, Sokoto, may have been abducted and housed at the palace of the Sultan of Sokoto.

Father of the girl, Mr. Paul Adaji, an indigene of Ochobo in Ohimini Local Government Area of Benue State, told Vanguard on phone that his daughter had been missing since August 12, 2015.

Adaji, who resides in Sokoto with his family, alleged that some persons spotted his daughter at the Sultan’s palace.

He said: “We got information that she was in the Sultan’s palace and the last time we went there, we did not find her.

When asked how they knew she was at the palace, he said: “Some people told us that they saw her at the palace. They also used to camp some of them there, that was why we went to the palace to see if she has been taken there.

“Even her friend, who used to be a Christian, was found there. She was taken there and they converted her. “We will still continue to search for her. We will not give up; we only want the world to help us so that our daughter can be released to us.”