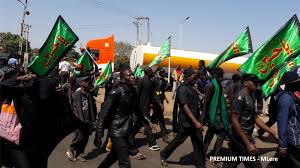 Members of the Islamic Movement in Nigeria on Monday shunned the inaugural sitting of the Judicial Commission of Inquiry into the December 12, 2015, violent clash between the group and the Nigerian Army in Zaria, Kaduna State.

At the commencement of the public sitting at the General Hassan Usman Katsina House in the State capital, venue of the public hearing, as early as 9 O’clock in the morning and waited for about an hour without seeing members of the Islamic Movement of Nigeria. They did not send any representative or apology.

Members of the commission arrived at the General Hassan Usman Katsina House, venue of the public hearing as early as 9 O’clock in the morning and waited for about an hour without seeing members of the Islamic Movement of Nigeria or their lawyers.

Their absence may be unconnected with their demand for the release of their leader, Sheik Ibrahim El-Zakzaky and over 700 of their members, who were taken into custody by security operatives days after the incident.

But the Nigerian Army was represented at the sitting by the General Officer Commanding One division, Major General Adeniyi Oyebade.

The absence of the Shiite members compelled the commission to adjourn till Wednesday, February 4 in expectation that counsel to the commission, Yusuf Ali, a Senior Advocate of Nigeria, would ascertain the whereabouts of Sheik El-Zakzaky and report back to the commission by the next sitting.

Some lawyers representing various interests at the panel asked the commission to ensure that all parties involved in the matter were adequately represented in order to give each of them a fair hearing, but the commission’s chairman, Justice Mohammed Garba, insisted that they had notified all parties involved about the sitting and therefore, does not have the powers to give an open invitation to any individual or group.

The commission’s chairman also announced that a total of 105 memoranda had been received from members of the public.

He reassured the sitting that the commission would conduct an unbiased investigation and recommend necessary action that would be fair to all parties involved.

Mr Garba also asked the Nigerian Army to ensure it was represented during all the sittings of the commission.

The commission, which has 13 terms of reference, will inquire into the immediate and remote causes of the clashes, and thereafter make recommendations to the state government.

600,000 Children Below The Age Of 5 In Jigawa Are Malnourished Says UNICEF