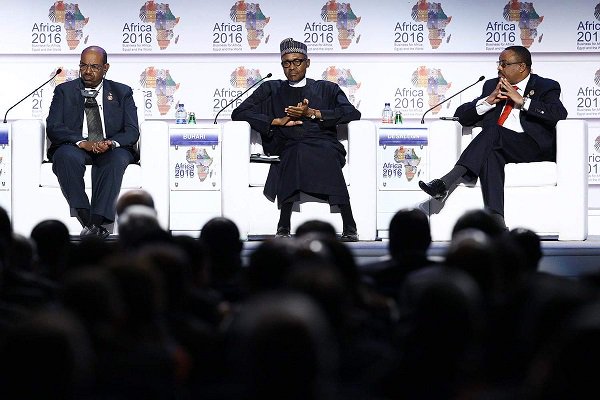 You’d think the Nigerian Central Bank is an independent body away from the influence of the Presidency… For the upteenth time, President Buhari has once again reiterated his earlier resolve not to devalue the Nigerian currency.

The presidency asserted this in a statement issued on Saturday by the President’s Special Adviser on Media and Publicity, Femi Adesina.

Buhari was quoted to have said this while speaking at a Presidential Panel Roundtable on Investment and Growth Opportunities at the opening of the Africa 2016: Business for Africa, Egypt and the World at Sharm El-Sheikh, Egypt.

“Developed countries are competing among themselves and when they devalue they compete better and manufacture and export more. But we are not competing and exporting but importing everything including toothpicks. So, why should we devalue our currency?”

“We want to be more productive and self-sufficient in food and other basic things such as clothing. For our government, we like to encourage local production and efficiency.”

The presidency also stated that Nigerians who have grown a taste for luxury goods that are made abroad should desist from buying them, rather than pressurize government to devalue naira.

He further said that since Nigeria’s economy was too dependent on oil, and with a vast array of economic difficulties, the only alternative way out of the current fall in the international price of fuel is for government to focus its attention on solid mineral development and agriculture.

While expressing hope that the country will survive the present economic hardship, Buhari noted that terrorism was the major problem delaying economic growth, due to the amount of resources used in fighting the Boko Haram insurgency.