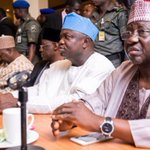 President Muhammadu Buhari has been advised to sanction state governors who failed to conduct local government elections at the appropriate time.

Former Leader of Senate, Victor Ndoma-Egba, gave the advice in an interview with journalists in Calabar on Friday.

He said the failure of any governor to conduct council polls when due was a constitutional breach that should attract appropriate sanctions.

He urged Buhari to muster the needed political will to sanction any state government that violated the law regarding local government elections.

“There are consequences for breaching the constitutional requirements to have a democratically elected local government system in place.

“For instance, the Federal Government should withhold your funds, until you have a democratically elected system in place.

And I am sure the APC will consider all of such option. “It is not business as usual for us not to have a democratically elected local government in place. President Buhari should insist that the provision of the constitution be upheld.”

Ndoma-Egba is in Calabar for the Feb. 13 rally by the All Progressives Congress (APC) to formally welcome new members in Cross River into its fold.

Ndoma-Egba said those who now identify with the APC represented a “massive movement to the fold of the progressives.’’

Dakuku Peterside Did Not Insult Dr. Peter Odili Or The Wife Says APC