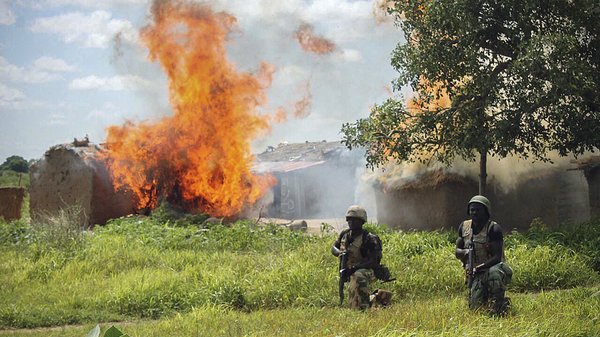 Almost a year after she was rescued from Boko Haram captivity by the Nigerian army, Zara John, 16, is still in love with one of the fighters who abducted her.

She was delighted to discover that she was pregnant with his child following a urine and blood test carried out by a doctor in the refugee camp to which she was taken after her rescue.

“I wanted to give birth to my child so that I could have someone to replace his father, since I cannot reconnect with him again,” said Zara, one of hundreds of girls kidnapped by Boko Haram during a seven-year insurgency in northeast Nigeria.

But any decision over the baby was taken out of her hands.

Her father drowned during flooding in 2010 so her uncles intervened. Some were adamant that they did not want Boko Haram offspring in their family – and insisted on an abortion.

Others felt the child should not be blamed for its father’s crimes.

In the end, the majority carried the vote and Zara was allowed to keep her child, a son she named Usman who is now seven months old.

“Everybody in the family has embraced the child,” Zara in a telephone interview with AL-JAZEERA, asking that her location remain undisclosed. “My uncle just bought him tins of Cerelac [instant cereal] and milk.”

Zara was 14 when Boko Haram members fighting to establish an Islamic state raided her village of Izge, in northeast Nigeria, in February 2014.

They razed homes in the village, slaughtered men and loaded women, girls and children on to trucks.

Two of Zara’s brothers were out of town when the assailants struck in one of a wave of hit-and-run attacks on villages, as well as suicide bombings, on places of worship or markets.

Zara’s mother fell off one of the overloaded trucks but tried to chase after the vehicle that was ferrying away her only daughter and her four-year-old son, but was unable to keep up as it drove 22km to Bita.

At the time, Bita and other surrounding towns near the Sambisa forest were in Boko Haram control.

“As soon as we arrived, they told us that we were now their slaves,” Zara recalled.

Her days were spent doing chores and learning the tenets of her new religion, Islam, until two months later when she was given away in marriage to Ali, a Boko Haram commander, and moved from a shared house to his accommodation.

“He bought me food and clothes and gave me everything that a woman needs from a man.” She added that he also gave her a mobile phone with his number in it, and tattooed his name on her stomach to mark her as a Boko Haram wife.

Ali assured her the fight would soon be over and they would return to his hometown of Baga, where he intended his new wife to join his fishing business.

He told her he abandoned his trade and joined Boko Haram after his father and elder brother, both fishermen like himself, were killed by Nigerian soldiers.

In a June 2015 report based on years of research and analysis, Amnesty International said the Nigerian army was guilty of gross human rights abuse and extrajudicial killings of civilians in parts of northeast Nigeria, calling for an investigation into war crimes.

Ali was not at home when the Nigerian army stormed Bita in March 2015 and rescued Zara and scores of other women, taking them to a refugee camp in Yola in northeast Nigeria.

The raid came as international scrutiny on Nigeria increased after the high-profile abduction of 200 schoolgirls from Chibok in northern Nigeria in April 2014, which caused outrage internationally and sparked the global campaign #bringbackourgirls. The girls are yet to be found.

But Zara and Ali stayed in touch by phone until Nigerian soldiers realised some of the girls in the camp were still in touch with their abductors, seized their phones, and moved them to another camp until they were reunited with their families.