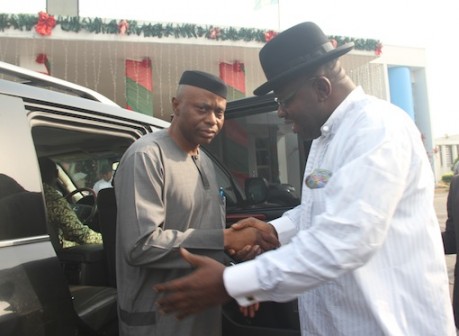 The governor’s noted that the appropriate organs of the party will meet soonest to elect a national chairman of the party from the north east zone.

They also congratulated governors of Rivers and Ebonyi States, Barrister Nyesom Wike and Engr. Dave Umahi over their victory at the Supreme Court, which affirmed their election as the governors of their states.

According to a communique signed by director general of the forum Osaro Onaiwu, the party said “the invasion of the party headquarters today by Ahmed Ali Gulak who reportedly assumed the chairmanship of the Peoples’ Democratic Party (PDP) is regrettable and condemnable.

“We take cognizance of the judgment by the court in Abuja which ordered the acting chairman to vacate office for any other person from the North-East zone of Nigeria.

“Our party constitution has enough provisions for that and the necessary process has been put in motion.

On the Supreme Court judgements on governorship elections, the forum said “We congratulate our brothers and colleagues, Barr. Nyesom Wike and Engr. Dave Umahi over today’s victory where the Supreme Court affirmed their election as the Governors of Rivers and Ebonyi States respectively.”

Ikpeazu said the verdict of the apex court on the cases of these two governors was a victory for democracy and a vindication of the people’s long-drawn struggle for justice, adding that it is also a tiding of good hope for the two states.

He commended the two governors for being the custodian of a divine mandate which represents the will and aspiration of their people and thanked the apex court for ensuring that the mandate remains sacrosanct.

The Governor also noted that the verdict of the Supreme Court on these two states has gone a long way in restoring the hope and confidence of the Nigerian people on the sanctity of the judiciary and commended the apex court for standing firm in the defence of the law and constitution of the land.

He further observed that the Supreme Court has acted well in setting the standard and precedence for proper interpretation of our electoral procedures, noting that with the standard set by the apex court, the contradictory verdicts experienced in the appellate courts will not repeat in the years ahead.

He commended the people of Rivers and Ebonyi States for putting up a good fight in supporting their governors and for their perseverance and doggedness throughout the legal battles that have now ended in victory and celebration.

He also expressed optimism that the two states will witness a watershed of drastic progress in the hands of the two dynamic leaders in the days ahead and advised his collegue governors to see their victory as the victory of the masses.