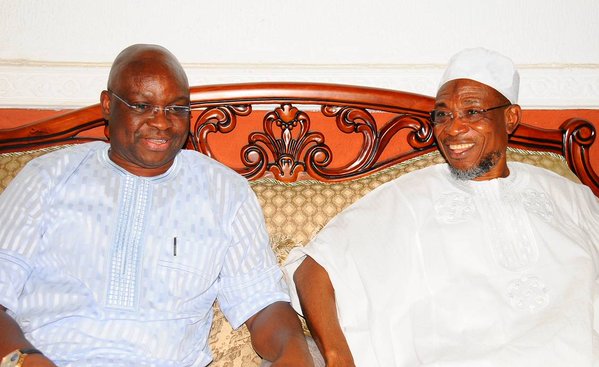 Governor Rauf Aregbesola of Osun on Tuesday advised his counterpart from Ekiti, Ayodele Fayose to face the reality of the death of his political party, the Peoples Democratic Party (PDP).

Aregbesola stated this when Fayose counterpart paid him a courtesy visit at the Government House in Osogbo.
?
He said while he is not asking the governor to abandon the PDP against his wish, he would only advise him to join hands with a political party that will give hope to the people of Nigeria.

He also charged the Ekiti State governor to direct his energy towards bringing human and physical development to western region and Nigeria as a whole.

Fayose, during the visit, said that he is in Osun not for any political reasons and that he is not ready to abandon the PDP for the All Progressives Congress (APC) but for his belief in the Yoruba race and her development and unity.

Aregbesola described the visit of Governor Fayose to Osun as demonstration of maturity, saying it takes a very matured human being to know that at the end of every public office, he will be left with humanity.

He said, “Osoko has said that he is not going to leave his party, but the reality today is that PDP has served its term in Nigeria. When a horse is dead, it is either you abandon it or you bury it.

“I want my good friend and brother to know that PDP has exhausted it’s stay in Nigeria, it can no longer be revived, let us look at a political party that will give hope to our people. Opposition must be for a purpose, I stand by you on the unity of Yoruba land and that our leaders not put down in the country.

“The war is over, we are in a season of mobilising our people to agriculture and produce such that we will economically have the strength to give leadership to the Nation and Africa. Our energy must be directed at bringing human and physical development, we have enough in this region to give leadership”. Aregbesola stressed.

Speaking earlier, Governor Ayodele Fayose of Ekiti State says the strength of any true democracy lies in the existence of a viable opposition.

He has therefore vowed that he would not defect from the Peoples Democratic Party (PDP) unless the party ceases to exist.

It was the first time the Ekiti State Governor would pay a visit to his Osun State counterpart, Rauf Aregbesola.

Being his first official visit to an APC governor, Governor Fayose came with an impressive entourage as he exchanged pleasantries with all.

Speaking on politics, Fayose said that the absence of opposition in any democracy would lead to dictatorship and gave the assurance that he would not defect from the opposition Peoples Democratic Party.

Although Aregbesola shared the views expressed by the Ekiti Governor, he expressed his desire to see him purse his political ideology in a progressive party instead of the PDP.

Fayose maintained that he was on the visit particularly because of his concern for the unity of the Yoruba race, an issue Governor Aregbesola agreed needed attention.

Both governors then went further to exchange ideas on how to ensure that Yoruba people remain united irrespective of political differences.

As Governor Fayose prepared to leave, he told journalists that the story of his son’s arrest in Dubai was untrue.