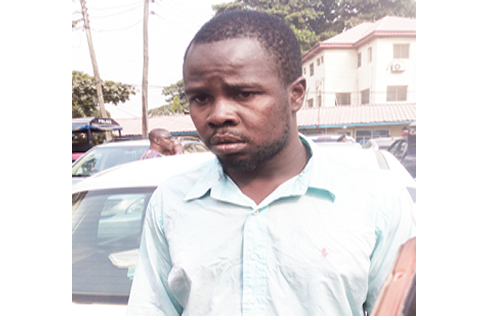 Many people were stunned when a 30-year-old father of two, without showing remorse, confessed to have sold his five-month-old son, Chidera, in agreement with his wife, for N500,000. The man, Okwuchukwu Ibekwe, said he and his wife, discussed the issue several times before they sold the baby to a lady identified as Chinelo, residing in Anambra State. Ibekwe said according to NewTelegraph:

“It was an agreement between my wife and I. I didn’t just wake up one day and decide to sell our baby. My wife and I decided to sell the baby and used the money we make from it to start a business so as to better our lives. We also planned to have another baby to replace Chidera.

What my wife and I were going through was unbearable. “I used to work as a motor mechanic at Ladipo Auto Market. The building housing my shop was sold by the owner. I had no other source of living. Someone gave me a commercial bus to drive, but after a while, the bus caught fire and got burnt.

It rendered me jobless; I didn’t have any other means of livelihood to carter for my children.” According to him, at a stage, it became difficult for him to take care of his wife and the two kids. He said that it was his wife, Oluchi, who came up with the idea of using Chidera, “to borrow money from Chinelo”. The suspect said that their agreement with Chinelo was to give him N500,000. The Lagos State Commissioner of Police, Fatai Owoseni, said that the buyer, Chinelo, is still at large with the baby. Ibekwe added:

“Chinelo gave me N250,000 and my wife N150,000. It was my wife who took the baby to Chinelo in Ihiala, Anambra State.” The matter, however, got to the police after the couple had a disagreement on December 8, 2015. The angry woman went to Iba Police Post, to report that her husband sold their baby. The man was arrested and later transferred to the Special Anti-Robbery Squad (SARS) office, Lagos Command, Ikeja, where investigation was launched into the matter.

Owoseni promised to synergise with the Anambra State Police Command, in order to arrest Chinelo and rescue the baby. He warned parents to desist from such act, no matter the condition such a person found him or herself. Owoseni said the suspect would soon be charged to court.