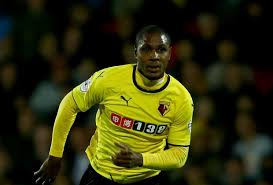 After a clanger by Liverpool goalkeeper Adam Bogdan, deputising for the injured Simon Mignolet, enabled Nathan Ake to give Watford a third-minute lead, Ighalo struck twice to seal an impressive victory.

Promoted Watford, who last won four successive top-flight games in 1987, now trail the top four by just a point, with Liverpool four points further back after a third successive league game without victory.

“It was a bad start to the game,” Klopp told Sky Sports. “Of course the first ball from Adam Bogdan, he should keep and he drops it.

“Having seen it again, usually it is a foul, but it is 1-0 and our reaction was really bad. We lost our mind and stopped playing football.”

Klopp had vigorously defended Mignolet after a shaky display in Liverpool’s 2-2 draw with West Bromwich Albion last weekend, but a hamstring injury prevented the Belgian from lining up at Vicarage Road.

It enabled Bogdan to make his full league debut, but the Hungary international made a nightmare start, fumbling Ben Watson’s corner and allowing on-loan Chelsea left-back Ake to stab the ball over the line.

Twelve minutes later it was 2-0 as Martin Skrtel failed to clear Troy Deeney’s lobbed through-ball and Ighalo hooked a shot across Bogdan and into the bottom-left corner.

Liverpool improved slightly after the break, Jordan Henderson and Emre Can testing home goalkeeper Heurelho Gomes, but Ighalo had the last word when he headed in Valon Behrami’s right-wing cross with five minutes remaining.

Asked if Watford could finish in the top four and secure a Champions League place, manager Quique Sanchez Flores told BBC Sport: “I don’t want to talk about that!

“Of course we want to dream, but we want to remain humble. We are completely happy with the performance. It was an amazing victory against an amazing team.”

Swansea City and West Ham United are both without a victory in seven league games following a turgid 0-0 draw at the Liberty Stadium.

Swansea, still without a manager following the dismissal of Garry Monk, remain in the relegation zone, two points from safety, while Slaven Bilic’s West Ham are four points below the top four in eighth place.

Swansea have been linked with former Argentina coach Marcelo Bielsa, but caretaker manager Alan Curtis does not know when a long-term successor to Monk will arrive.

“I have to presume that I am in charge for the next few games as time is tight, but if someone comes in they will obviously take over,” he said.

Leicester City will top the table on Christmas Day after their 3-2 win at Everton on Saturday.

Second-place Arsenal and third-place Manchester City face off at the Emirates Stadium on Monday.