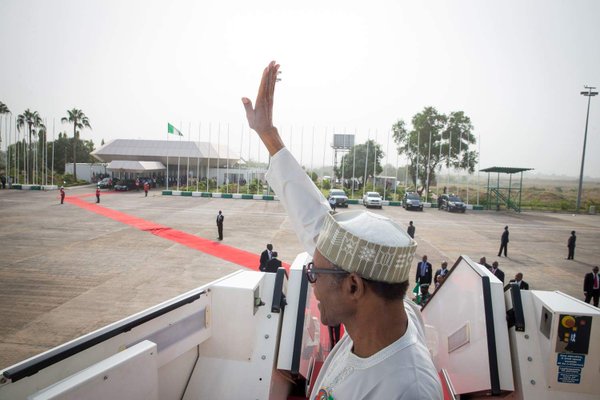 In a statement issued on Friday in Abuja, the Minister said all the trips have been anything but frivolous, and that they have started yielding
fruits in terms of turning the tide in the fight against the insurgents who have been most active in the North-east, attracting investments in the range of billions of dollars, and securing global support for the administration’s anti-corruption fight.

”Nigerians, whether in the ruling or the opposition parties, have a right to ask questions about the activities of their President, but it is
absolutely important that they do so from an informed, rather than partisan or sensational, standpoint,” he said.

The Minister explained that most of the President’s trips – to Nigeria’s neighbouring countries of Benin, Cameroon, Chad and Niger, as well as to Germany, the US, France and the UN – were devoted to rallying regional and global support for the war against terrorism

”He was in Germany at the invitation of the G7 to solicit support from the Industrialized Nations for the war against terrorism. No one who has witnessed the killings and maiming in the past seven years by Boko Haram will call such trips frivolous. After all, the security and welfare of the citizens are the reason for the existence of any government.

”The President’s visit to South Africa was to attend the regular summit of the African Union; the trip to Ghana was aimed at fostering better
relations with a brotherly country; the trip to India was for the India-Africa summit that provided the opportunity to explore ways of
enhancing Foreign Direct Investments (FDIs) from Indian investors, while the trip to Iran was to attend the forum of Gas Exporting Countries, a veritable platform for discussing how to better harness Nigeria’s abundant gas resources for industrial/domestic consumption
and export, at a time of dwindling oil prices.

”The President also travelled to Malta to attend the Commonwealth Heads of Government Meeting, from where he travelled to Paris for the UN Conference on Climate Change. The President’s second trip to South Africa since assuming office is for the China-Africa forum. On the few occasions that the President has embarked on a State Visit, he has tied that to an agenda that will further the quest for support for the war against terror and the efforts to enhance FDIs, thus stimulating economic growth and creating jobs,”the Minister said.

He said that apart from rallying global support for the country’s wars on terror and graft or seeking foreign investments, it is important that
Nigeria leverages President Buhari’s brand, a high integrity quotient and an embodiment of committed and dedicated leadership, to further Nigeria’s relevance and visibility on the global stage.

”President Buhari is well respected on the global stage for his high integrity, his transparency, his patriotism and his purposeful leadership.
It is important to leverage this respect in such a way that Nigeria can become a major player, either in the realms of economy or global
diplomacy,” the Minister said.

He said the President had embarked on the trips under a very stringent budget, cutting his delegations to numbers far below what his
predecessors used to travel with, while even the trimmed entourage had received reduced allowances on the occasions that the host governments have provided accommodation and feeding.